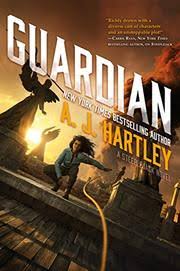 When Willinghouse is framed for murder, Anglet Sutonga, former steeplejack and spy, tries to clear his name. But the white government starts enacting racist policies that disenfranchise the native black Mahweni and brown Lani populations. Meanwhile a mysterious illness strikes the Drowning, where Ang’s sister lives. As tensions in the city increase, Ang starts to wonder if the city she loves can survive.

This book refers often to actions and people from the previous books in the series, so be sure to read them before starting this one.

While Ang isn’t involved with politics herself, the book depends very heavily on the city’s new policies and how people of different races are treated. I loved seeing a variety of leaders from different groups come together at different points trying to create peace and protest the government’s actions.

The book deals very heavily with race relations, showing clear racist actions on the part of the white men in charge. There are peaceful rallies with some frankly brilliant speeches that wouldn’t be out of place at a Black Lives Matter event. The ending is fantastic in this regard, leaving you with a sense of hope that’s desperately needed in today’s political climate.

Ang goes through several emotional upheavals during the book. She’s able to repress her emotions so she can focus on a number of problems, but I liked how the book addressed some of her feelings at the end, once she has time to deal with them.

I really enjoyed this series and while the book deals with heavy subject matter - especially in today’s political climate - its ending of hope really makes it a worthwhile read.
Email ThisBlogThis!Share to TwitterShare to FacebookShare to Pinterest
Posted by Jessica Strider at 10:38