Book Review: Beneath the Sugar Sky by Seanan McGuire 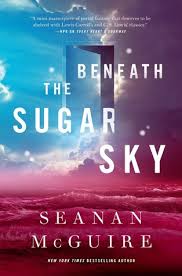 When Rini falls out of the sky at  Eleanor West’s Home for Wayward Children she’s shocked to learn that her mother has died. Several students help her bring her mother back, knowing that if they fail than Rini will be erased from existence.

This is the third novella in the Wayward Children series and returns - for a time at least - to the setting of the first book. In addition to the school and the students there, you also see Nancy again.

Rini is from a nonsense world, Confection, the world her mother, Sumi, went to and was hoping to return to one day. There’s another new character, Cora, an overweight girl who loved the underwater worlds where she was a beautiful mermaid. She’s the main point of view character, which allows the reader to understand her feelings around weight and self-confidence (and the attempts by others to use the first to undermine the second). It was interesting seeing her interactions with Christopher, who went to a world of skeletons and who therefore as unconventional ideas about flesh and weight.

The plot is fairly linear and takes the group to several locations. There are some dangers they face, though not always physical ones.

I thought the mythology of Confection was kind of cool and really fit the kind of world it was - giving it a weird sort of logic despite its nonsense overlay.

It’s a quick, fun read.
Email ThisBlogThis!Share to TwitterShare to FacebookShare to Pinterest
Posted by Jessica Strider at 10:20