Alchemy Laboratory Part 3: Putting It All Together

You can see parts 1 and 2 of this project here.

Once the box was finished I was able to start adding decorations to it.

The left wall had three framed items: butterflies, a bat, and fairy wings. I rolled up some alchemical images and laid them in the corner. The celestial sphere at the base of the bookcase sits on a custom 3D printed stand and has some glow in the dark crystals on it. 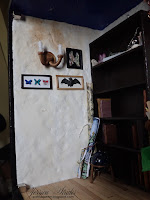 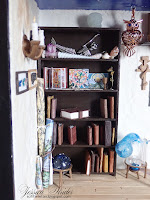 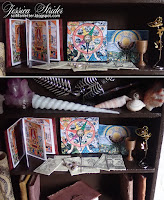 Around the corner is the bookcase. The top shelf had natural history items, followed by alchemical images, tarot cards, the metal flower, an accordion book, etc. The remaining shelves were stocked with books, including one with a clasp closure (not seen in these pictures is the magnifying glass that was added later). On top sits a glow in the dark skull. After this picture was taken I added some black ink to it to give it more definition.

Beside the bookcase is a hanging metal owl and two shelves. The top shelf has a 3D printed chest of drawers and several filled bottles (more bottles were added after these pictures were taken). The lower shelf has a test tube holder and more bottles. Below them is the alembic on the furnace. Anachronistic tubing leads to a glass container and a vial on the floor. A container on the other side helps fill the middle vial. On the wall is a dance of death image by Hans Holbein the younger and a 3D printed alchemical symbol of Nicholas Flamel. 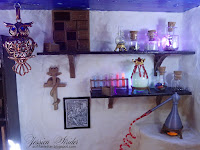 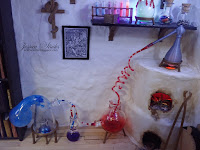 The furnace has several pairs of tongs and pliers leaning against it and hung on the wall next to it, along with a bellows. Above the tools is a cameo of the Virgin Mary. 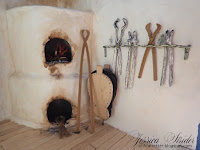 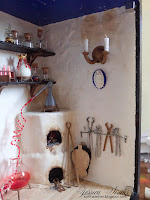 Here's an image with the completed walls and back. I then glued down the table, making sure the candle wire went up the leg and was glued to the table top. It's got an armillary sphere, scales, several experiment pieces including an hour glass, the inkwell, a mug, cloth, keys, handwritten notes and an open book. Under the table is the mortar and pestle and a drawer with 'gold'. Beside the desk is a pile of books with another open book on top and a kitten poking its head out. 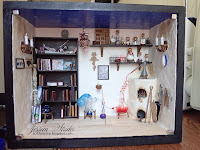 The finished diorama! There are 3 modes: flickering candlelight, brightly lit, and ultraviolet. When those go out several items in the display glow. 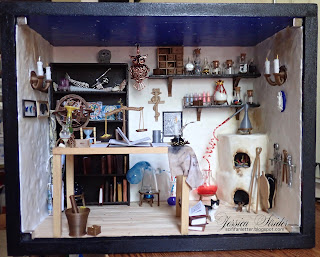 The finished dimensions of the box are 12" wide, 9 1/2" high, and 5 1/2" deep. Here's a video tour I did of the display, giving a closer look at the pieces and finished diorama.

I've set up an album here, with more detailed shots and explanations on how I made the box and all the items inside, including ones that I wasn't able to detail in these blog posts. Click on any photo in the album and then the circled 'i' icon at the top to read the descriptions.

I'm very happy with how this turned out. It was a lot of work and a real learning experience.
Email ThisBlogThis!Share to TwitterShare to FacebookShare to Pinterest
Posted by Jessica Strider at 09:30