Novella Review: After the Fall, Before the Fall, During the Fall by Nancy Kress 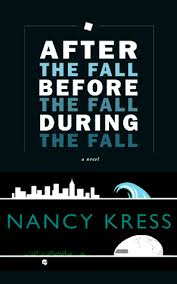 In 2013 an FBI agent partners with a mathematician to try to solve a series of child kidnappings.  In 2014, a series of ecological disasters occur.  In 2035, a tiny group of people try to increase their population enough to save humanity from extinction by grabbing children from the past.

Told in three periods, the before, during and after of the title, this novel explores the activities surrounding an apocalyptic event.  It’s a short, quick read, at just under 100 pages.  There’s a fair amount going on in the story, especially as tensions in the future mount among the young men.

The characters are all pretty interesting to read about.  Julie’s probably my favourite, as she knows what she wants and, until the end, is confident in her decisions.  I found Pete sympathetic, but not the most likeable character.  Still, his story was interesting as he interacted with the others in the future.

I had a few issues with the ending, particularly since several rather important issues were never explained.  I’ll detail these in the spoilers section.

Despite not being entirely satisfied with the ending, this was an enjoyable, quick read.

The ending implies that the apocalypse was caused by Gaia - meaning ‘the earth’ - in order to counteract the actions of humans in the past century.  So, knowing humans would make a hash of the world again - eventually - why save some?  Why not just wipe out humanity and save some animals, things that respect their places in the circle of life?  I was also surprised that the Tesslies let the humans live - and leave the enclosure - once they realize that the negative emotions that ultimately led to the need for the apocalypse - jealousy and hatred - were still present.

Most importantly, what are the Tesslies?  The impression I was left with was that they were an extension of Gaia.  In which case, how did they create the metal enclosure, the water purifier, the disinfectant machine, the time machine and how did it pick and then teleport the humans to the enclosure?  And why so few?  I have trouble imagining how this group could repopulate properly, even with the kids they grabbed from the past.  There are simply too few people left.

My other question is, who did people think planted the supposed underwater bombs they believed caused the tsunamis?  And how many bombs would you need to wreck the coastlines?  Everyone starts nuking each other, but why?  How would nukes help anything?  Whoever survived would be further negatively impacted - as would Gaia.  And whatever enemies you thought were responsible would have caused a lot of destruction on their own lands too.

Labels: After the Fall, apocalypse, Before the Fall, During the Fall, Nancy Kress, Novella, review