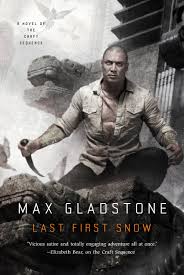 Cons: tension lost if read previous novels, ending of final battle is a let down

Forty years ago the King in Red, Elayne Kevarian and Temoc Almotil met in battle in the Gods’ War.  Now Elayne is back in Dresediel Lex, a Craftswoman and consultant for the King in Red on a contract to fix the Skittersill, the old temple slave’s quarter.  But the people of the Skittersill haven’t been included in the deal, and their massed discontent could break the world.  So Elayne goes to meet with its various representatives, including Temoc, the last Eagle Knight and priest of the old Gods, in hopes of resolving the tension peacefully.  Temoc meanwhile struggles with the different demands of priesthood and fatherhood in this time of crisis.

This is the fourth published novel in the Craft Sequence, but the first chronologically.  This book takes place in the same city, with many of the same characters (only younger) as the second published book, Two Serpents Rise (which I reviewed here).  Having read that book, some of the narrative tension of this one is lost, as I already knew certain characters would survive.  Similarly, though I don’t remember that book as well as I’d like, I had to reevaluate the relationships I remembered with the new, ‘prior’ relationships of this book.  When the books are all out I look forward to reading them in order to see how well they follow each other, and how characters develop across the books.

The characters are fascinating and the world-building sound, as usual with Gladstone’s books.  And that’s good, because there’s less judicial mystery in this story, with the centre being more character than plot focused.  Both Elayne and the King in Red perform some interesting Craft, and you see the power of the defeated Gods in play at the end.

The big battle is quite apocalyptic, but ends somewhat disappointingly.  It felt like the author’s hands were tied, needing certain people to survive for book two, and couldn’t quite figure out how to end the battle well as a result.  There are some clever plot twists in the book, including the final battle, that were great though.


Despite its few faults it’s a great book and this is a wonderful series.
Email ThisBlogThis!Share to TwitterShare to FacebookShare to Pinterest
Posted by Jessica Strider at 12:53