Blast From the Past: Transformation by Carol Berg

Carol Berg is an author I've mentioned a few times as being highly underread and underappreciated. When I was growing up I developed this certainty that authors only wrote one series I'd like, and once I found that series it wasn't worth reading anything else by that author.  Carol Berg blew that idea away.  While some fantasy authors create one fully realized world that they play in long after they've runt out of original plot ideas to fill the world with, Carol Berg has created new, intricate worlds for each series she's written.  I haven't had the chance to read her Collegia Magica novels or the the Sanctuary Duet, but I've loved every other book she's written.  That's really unusual for me.

The first book I read by her is the stand alone novel, Song of the Beast.  It showed me how
thoroughly she's willing to torture her protagonists, and how she's not going to give you an ending with all loose ends tied up, because life doesn't do that.  She is however, going to give you a wild ride, fantastic characters, and an ending that fits the story and leaves you satisfied.

The second book I read is the one that's remained my favourite, Transformation, the first book she wrote and the first in the Rai-kirah trilogy.  Generally her books can be read as stand alones, in that she typically doesn't leave cliffhangers (though I know the Lighthouse Duet duology breaks this pattern), and Transformation is the same. 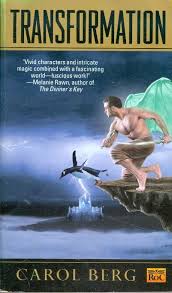 The protagonist, Seyonne, has been a slave for 18 years and at the beginning of the book is purchased by the arrogant, selfish, hedonistic heir to the Derzhi Empire.  When the prince's life is threatened by magics Seyonne was trained to fight in his youth, before he was enslaved, he must decide if the young man's life is worth saving.

The unlikely friendship that develops between Seyonne and Prince Aleksander is fantastic, as is the surprising humour that permeates the otherwise sad, and often horrific, story.  If you like seeing characters go through the wringer to the point that you question how they're able to go on, this is the book for you.  Berg is able to play on your emotions, showing you the worst that can happen and then breaking the tension by making you laugh out loud.  In this book at least.  The other books I've read by her don't have as much humour, which is probably why I love Transformation so much.

Berg is an author whose world is so immersive, and whose characters Bridge of D'Arnath series each work day was a countdown until I could read again, and my days off were me, perched on a chair, racing through the books as fast as I could turn the pages.
are so compelling, you'll be reaching for the next book as soon as you finish.  Indeed, when I read the four books of her

I cannot recommend her work strongly enough.  If you love fantasy, do yourself a favour and pick up her books.
Email ThisBlogThis!Share to TwitterShare to FacebookShare to Pinterest
Posted by Jessica Strider at 11:04

Labels: Blast From the Past, Carol Berg, Fantasy, Transformation