Books Received in June of 2015

Many thanks to Tor for sending me the following titles for review.


Blood of the Cosmos by Kevin Anderson - This is book two of his Saga of Shadows trilogy that started with The Dark Between the Stars. 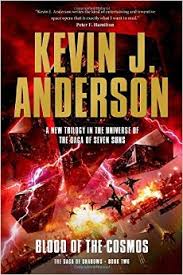 An epic space opera of the titanic conflict of several galactic civilizations against a life-destroying force of shadows, a dark cosmic force that has swept through the undercurrents of the human interstellar empire.

As the second book of the trilogy opens, the humans and Ildirans, having narrowly escaped annihilation at the hands of the Shana Rei and their robot allies in Book One, are desperate to find a way to combat the black cloud of antimatter of the Shana Rei. The mysterious alien Gardeners, who had helped them previously, turn out to be a disaster in disguise and because of them, the world tree forests are again in danger. The allies believing they have found a way to stop their dreaded enemies, a new weapon is tested, but it's a horrible failure, throwing the human race and its allies to the brink of extinction.


Corsair by James Cambias - A novel of space pirates and hackers.  I'm currently reading his debut which came out last year, A Darkling Sea. 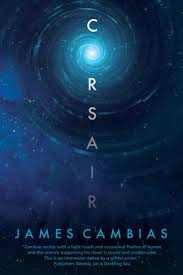 In the early 2020s, two young, genius computer hackers, Elizabeth Santiago and David Schwartz, meet at MIT, where Schwartz is sneaking into classes, and have a brief affair. David is amoral and out for himself, and soon disappears. Elizabeth dreams of technology and space travel and takes a military job after graduating. Nearly ten years later, David is setting himself to become a billionaire by working in the shadows under a multiplicity of names for international thieves, and Elizabeth works in intelligence preventing international space piracy. With robotic mining in space becoming a lucrative part of Earth's economy, shipments from space are dropped down the gravity well into the oceans. David and Elizabeth fight for dominance of the computer systems controlling ore drop placement in international waters. If David can nudge a shipment 500 miles off its target, his employers can get there first and claim it legally in the open sea. Each one intuits that the other is their real competition but can't prove it. And when Elizabeth loses a major shipment, she leaves government employ to work for a private space company to find a better way to protect shipments. But international piracy has very high stakes and some very evil players. And both Elizabeth and David end up in a world of trouble.


Trial of Intentions by Peter Orullian - Book two of the Vault of Heaven series, begun with The Unremembered. 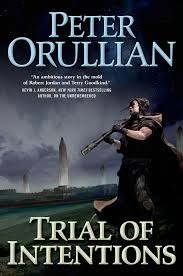 The gods who created this world have abandoned it. In their mercy, however, they chained the rogue god--and the monstrous creatures he created to plague mortalkind--in the vast and inhospitable wasteland of the Bourne. The magical Veil that contains them has protected humankind for millennia and the monsters are little more than tales told to frighten children. But the Veil has become weak and creatures of Nightmare have come through. To fight them, the races of men must form a great alliance to try and stop the creatures.

But there is dissent. One king won't answer the call, his pride blinding him even to the poison in his own court. Another would see Convocation fail for his own political advantage. And still others believe Convocation is not enough. Some turn to the talents of the Sheason, who can shape the very essence of the world to their will. But their order is divided, on the brink of collapse.

Tahn Junell remembers friends who despaired in a place left barren by war. One of the few who have actually faced the unspeakable horde in battle, Tahn sees something else at work and wonders about the nature of the creatures on the other side of the Veil. He chooses to go to a place of his youth, a place of science, daring to think he can find a way to prevent slaughter, prevent war.