History Book Review: The Murder of William of Norwich: The Origins of the Blood Libel in Medieval Europe by E. M. Rose 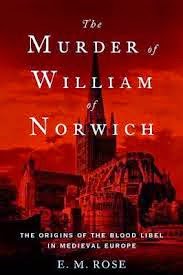 The accusation that the Jews of the city of Norwich murdered the apprentice William in a mockery of the crucifixion, and the Life of St William that was later written, set the stage for similar accusations in the future, accusations that eventually saw Jews burned at the stake and expelled from the cities they called home.

This is a highly academic book that goes over a wide variety of background information (family trees, identities of various players - and their relations to others who may have had influence, the second crusade, the civil war between Stephen and Matilda, etc.).  As Rose is using very limited sources with regards to the actual blood libel cases, there’s a sometimes circuitous route from the background information to how it ties into the cases.  It’s quite a fascinating piece of deductive reasoning, putting minor clues together to form a cohesive and intelligent narrative, - even if it’s admittedly based on numerous suppositions.

Rose is obviously aware of all of the scholarship that’s been done on this topic and refutes a lot of theories.  For example, there’s the idea that all blood libel cases involved rioting and executions or expulsions, which may be the case for later centuries, but when the cases first appeared any negative consequences generally followed years later, and tended to have political and/or economic reasons behind them (from forcing the Jews to ransom themselves so their captor could pay bills to acquiring their land and assets).  While a lot of Rose’s conclusions are based on thin information, there’s enough supporting evidence to show that - though they can’t be proved conclusively -they are plausible.

Rose proves that the murdered children themselves (assuming there’s even a body) are secondary to the economic and political concerns of those citing the accusation.  Though nominated for sainthood the boys hardly ever appear in liturgical calendars, prayers, artwork, etc.

I found the earlier chapters very intense, and had to pay close attention in order to not get lost in the various strings being woven into the narrative.  Later chapters (particularly the ones in part 2), were much more linear and easier to follow.

Some of the background information was fascinating in its own right, like the extreme financial cost of going on crusade, the raids done by both sides during the civil war and how knights forced churches and civilians to ransom themselves to pay the costs of war (and/or for booty).  It also brought out the financial problems some nobles and churches had, and how unpalatable some of the clients were from the point of view of the moneylenders (both Christian and Jewish).

Though the book is highly academic, Rose gave enough background information to allow me - a relative newcomer to the case - to follow along easily.  Not only that, the book revealed a lot about the state of research on these cases and how previous historians have interpreted the data.  It’s a fascinating history that examines numerous sides of the origins of the blood libel and how the story may have originally spread.
Email ThisBlogThis!Share to TwitterShare to FacebookShare to Pinterest
Posted by Jessica Strider at 10:25