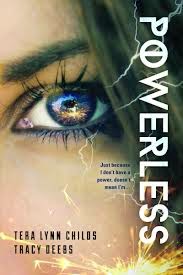 Kenna Swift’s superhero father died when she was a child.  Her mother is now a lead scientist for the heroes.  To help keep her daughter safe, her mom created an illicit serum that gives her immunity to hero and villain powers.  Kenna is working late in her mom’s lab, copying notes and keeping track of her own unauthorized experiments to give herself superpowers when a group of villains attack.  Their claims of looking for a kidnapped villain - supposedly held somewhere in the building and being tortured by heroes - sound crazy, until she does some investigating and discovers that the world isn’t as black and white as she’s always believed.

Kenna is a great protagonist.  She’s got some issues from seeing her dad die and feeling like she’s powerless in a society of powered people.  She resents the idea that she has to be protected - by her mother’s serum and by the powered individuals around her - even as she realizes that those protections are necessary.  Because this is such a quick read, and because she - realistically - dwells on those thoughts a lot (as her need for protection keeps coming up), they become a bit repetitious by the end of the book.  She’s very much a no nonsense woman, who speaks up for herself and uses her analytical abilities to keep calm in extreme circumstances and come up with plans for what to do next when things go wrong.  She also takes responsibility for her actions and realizes that she’s better off solving the problem and making amends than wallowing in pity.  She’s also, for the most part, quick on the uptake, which is such a pleasure to read, as it seems a lot of teen protagonists tend to miss important clues.

The romance elements were understated, with Kenna often realizing that the time and/or place wasn’t right.  It allowed things to develop more slowly and in the down time between action sequences.

It was great seeing a female friendship that was positive and showed how friends resolve things, even when one of them has betrayed a trust.  And speaking of Rebel, I wondered if that was a nickname or her real name.  If it was the latter, than her parents only have themselves to blame for her attitude.

The guys were pretty kickass, even if they did bicker and fight a lot.  I was a bit surprised by why they thought Kenna needed so much protecting, considering their powers wouldn’t save them from the dangers they faced, so how could they protect her from those dangers?

I was left with a lot of questions about the world that I hope the next book answers.  There’s very limited world building, and in some cases I think knowing more about the world would have been helpful.  For example, there are hints that villains and heroes have different powers, which made me wonder if that’s what decided a hero vs villain status.  Similarly, I’d have liked to know more about the hero/villain tattoos, given one of the later scenes in the book shows there’s more to them than I expected.  Since Kenna’s so immersed in the hero world it was a surprise later on for me to discover that apparently other normals don’t even know super powered people exist.  Which raised a lot of other questions about the world.  It had no bearing on the plot, but was a piece of world building that probably should have been clearer earlier on.

While it was nice to find bad guys who don’t explain their evil plot to the protagonists, it would have been nice if something of their motives had been explained.  Similarly, I was surprised by Mr Malone’s lack of concern for his children (see the spoiler section for more on that).

The plot - like Kenna’s internal debates - got repetitive towards the end, so it’s a good thing it was a quick read.  It’s easy to gloss over that when you’re steamrolling through the book.  A lot of things are left unresolved by the ending and I’m really looking forward to picking up the next volume.

Mr Malone doesn’t seem to care that his daughter disappears for a few days and then sends people to shoot up Riley’s apartment, despite the fact that Riley’s power of flight won’t protect him from bullets.  He had no reason to believe Riley would side with the others - and indeed he doesn’t until he’s forced to flee with them to avoid all the ammunition.

I’m really not sure what to think of Draven’s revelation at the end of the book as that came entirely from left field.  The next book has a lot of questions to answer.
Email ThisBlogThis!Share to TwitterShare to FacebookShare to Pinterest
Posted by Jessica Strider at 10:18