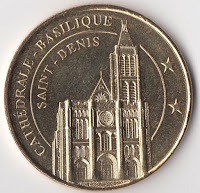 [I'll be using a lot of architectural terms in this series of posts, and in the interests of not doing work that's already been done, instead of making my own glossary I'm linking to this excellent one by Athena Review.  With one noted exception, all photos used in this post are mine, and can be used by others provided you post a link to this page and credit me.]

Built on what was believed to be the resting place of Saint Denis (whom I'm planning a post for for next Friday), this basilica (which only became a cathedral in 1966) was the centre of worship for a benedictine abbey.  It was patroned by kings, and served as their mausoleum.  It was also used to house their war standard, the Oriflamme.  Before they went to war the kings would go to the abbey for a blessing and to retrieve their flag.


In the 12th century Abbot Suger, having read the works of Pseudo-Dionysius about the esthetics and symbolism of light as a way of seeking God and Heaven, wanted to allow more light into the church. The building style that came out of his ideas - vaulted roofs that put pressure on buttresses rather than the whole wall and allowed holes to be cut into the sides of the building to put in windows, the tripartate structure of the inside (of aisle arcade, gallery or triforium (in a few cases both), and clerestory) as well as the tripartite structure of the new west facade (with three portals for entering the church), became widespread and led to what we now call Gothic architecture.

Suger wrote two works that have come down to us, one on how he raised money for the rebuilding and one on some of the commissioned works that adorned it, including some stained glass scenes - featuring him - that have survived.  (The Metropolitan Museum of Art has a book you can download for free on his works.)  He was also the first to commission a stained glass window depicting the Tree of Jesse (some panels of which still exist).

Rather unusually, Suger started his renovations with the west end of the church from 1135-40, creating the first three portaled west facade.

The facade is currently undergoing renovations and is boarded up, so I'm including a photo from wikimedia taken by Ordifana75.
A few things to note are the three portals, the circular rose window(which now has clock hands) with the symbols of the evangelists/beasts of Revelation in the 4 corners around it, and the crenelations along the top of the building, giving it the look of a castle.

The central portal depicts the Last Judgement.  Here is a photo of the door - with a mini Suger at the bottom left of the last supper image (right side, two down) - and the stone portal above it, with an image of Christ in Majesty, hands outflung as if hanging on the cross, that I took in 2003. (The other two doorways, both of which depict scenes of St. Denis' life, have been heavily restored.  The left portal is flanked by stone sculpture of the signs of the zodiac, while the right is flanked by a calendar of work done during each month.  Both of these are used by later cathedrals.) 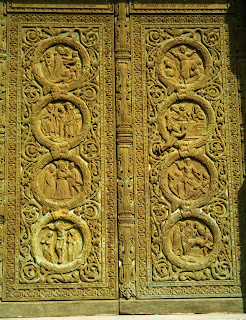 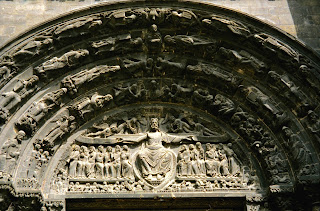 The east end of the church (choir and chevet) was rebuilt next, from 1140-44.  This included lots of stained glass (the entire upper level of which was melted down for its lead and so contains modern glass).  He also had a double ambulatory constructed, so large numbers of pilgrims could walk around the chapels without disturbing the monks at worship.


The nave, connecting Suger's two projects, was rebuilt starting in 1231 by Abbot Odo Clement, in the Rayonnant Gothic style, with thin walls and lots of windows.  The triforium level, usually backed by stone, was instead filled with stained glass, in addition to the windows in the aisle and clerestory, almost creating a wall of glass.

The north transept sculpture (as well as the entire east end of the church, inner transept arms and crypt) is only visible if you pay to see the east end (normally Eur 8.50, but reduced to 6.50 when I was there due to the renovation work), is mostly broken archivolt sculpture.  There are traces on the bottom left of what may have been annunciation and visitation scenes, while the right shows definite signs of some sort of hell scene.  The stone tympanum has been replaced with wood. 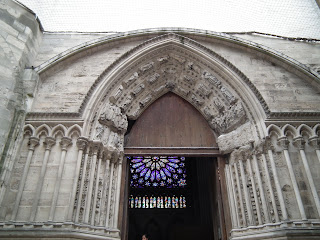 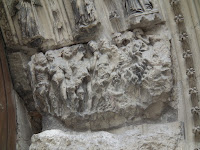 The south transept has been restored and shows scenes of the life of St. Denis in the tympanum, with kings in the archivolts and on the jambs and a Virgin and Child trumeau. 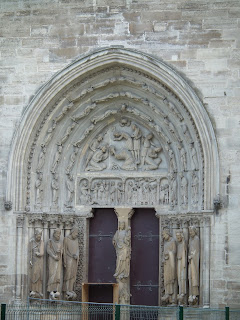 For my trip I created a one page layout of the cathedral and all of its sculpture.  I was a little too rushed to use it properly, but I've updated it (based on what I learned on my trip) and present it here for anyone wishing to use it for their own trip or research.  If you use this for a website or school paper, please credit me as the creator and/or link back to this post.  The map of the tombs and the dates of those resting in them comes from this UK Tourism 93 website. 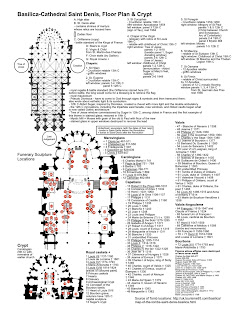 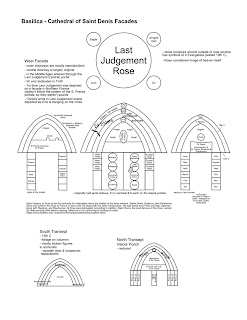 [I'm not sure how to upload them as pdfs so I've converted them to jpgs.  They're printable, but the text is a bit blurry.  If you want the pdf files, email me and I'll send them to you.]

Email ThisBlogThis!Share to TwitterShare to FacebookShare to Pinterest
Posted by Jessica Strider at 12:57