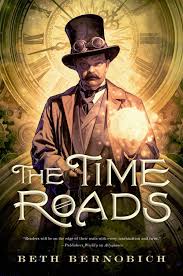 Cons: some confusing aspects, one story dragged a bit

In an alternate reality where Eire (Ireland) rebelled against and conquered Anglia (England) to become a powerful empire, a young Queen supports the efforts of a scientist to examine temporal fissures.

Told through 4 interconnected stories, starting with the Queen and her scientist, this book examines the difficulties that arise when time is not static.

This is a book best read with few interruptions and a lot of attention, as certain parts can be confusing (as events in history are changed - thereby changing the memories of those involved).  It’s easy, at those moments, to lose track of what’s happening.  Though the book covers several years worth of events, from 1897 to 1914, the ending pulls the different threads together in a satisfying way.

There are three narrators.  The Queen of Eire, Aine, who takes the throne unexpectedly at a young age, and sets the plot in motion by supporting the investigation in to the time arts tells the first story.  We see her viewpoint again in the fourth story, later in her reign, as a ruler with few people she can trust and a lot of political intrigue to manage.  In both stories she’s portrayed as someone who listens to the advice of her advisors but who is willing and able to make the difficult decisions of rule necessary of her.  She’s able to compartmentalize her thoughts and feelings from the outward persona of Queen that needs to be maintained at all times outside her private rooms.  She’s an interesting character who makes tough choices.

Siomon Madoc, the second narrator, had an interesting story, but I didn’t connect with him as well as I did with Aine.  I also found his story the most confusing, and I’m not sure I really understood how it ended.

I really liked Aidrean O Deaghaidh, the third narrator.  He’s got an interesting way of seeing the world by this stage, which I found fun.  The story itself dragged a bit, but ended with a fair amount of action.

It’s always cool to see a book pull various threads together into a cohesive whole, and Bernobich does an excellent job of that here.  While I didn’t understand everything that happened - unfortunately I had to take a few longer breaks during my read - I closed the book with a sense of contentment.
Email ThisBlogThis!Share to TwitterShare to FacebookShare to Pinterest
Posted by Jessica Strider at 10:36