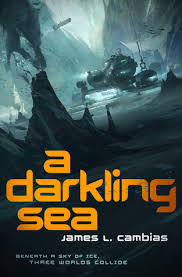 An accident occurs among the humans observing the native intelligent life forms deep in the oceans under the ice of the distant planet Ilmatar.  An alien race older than humans, the Sholen, have decreed that no contact be made with the natives for fear of human colonization.  They send a ship to the planet to verify that no rules have been broken, but their inner politics dictate that the humans’ mission be shut down, regardless.

Meanwhile, Broadtail 38 Sandyslope, along with a group of likeminded Ilmataran scientists, makes a strange discovery that changes the course of his life.

I love it when the first paragraph of a book sucks you in and doesn't let you go.  And this book has an awesome one:

By the end of his second month at Hitode Station, Rob Freeman had already come up with 85 ways to murder Henry Kerlerec.  That put him third in the station’s rankings — Joseph Palashnik was first with 143, followed by Nadia Kyle with 97.  In general, the number and sheer viciousness of the suggested methods was in proportion to the amount of time each one spent with Henri.

Rob Freeman is the research station’s underwater photographer and drone operator and the first, and only human, viewpoint character.  Through him we see how the humans get along and how they react when the Sholen show up.

Our Showlen point of view comes from one of their two scientists, Tizhos, the subordinate in a race that focuses on consensus and achieves it via sexual contact.  Through her we see signs of how their society works, using pheromones to calm and attract, as well as trying to subdue natural reactions, like anger and frustration, to maintain peace.

We’re given two Ilmataran points of view, one through Broadtail, a scientist and landowner, and the other through Strongpincer, a bandit.  This, and Broadtail’s adventures, allows the reader to get a wider idea of the Ilmataran society.

The alien societies are quite fascinating, and distinct.  Ironically, many of the problems that occur in the book are because each group expects that the aliens think and act the way they do - even when the person making this assumption knows better.  So, for example, the humans’ passive aggressive screaming and handcuffing tactic isn’t understood by the Sholen, despite the humans thinking it’s a universal form of protest.

While I didn’t like all of the characters, I’m looking at you Richard Graves, there was a good variety of personalities and temperaments represented.  Every character had their own motivations for what they did, and reacted differently to the various crises that occur.

The story was very interesting, with a lot going on all the time.  And it's a stand-alone novel.

This is a fantastic debut.
Email ThisBlogThis!Share to TwitterShare to FacebookShare to Pinterest
Posted by Jessica Strider at 12:57

It wasn't 100% perfect, but nothing stood out that I could point to as something I didn't like.