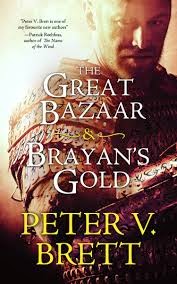 This is a collection of 2 short stories and 2 passages that were cut from The Warded Man.  Each story has a short introduction from the author explaining either where the ideas came from or why the scene was cut.  The stories were originally published as limited edition hardcovers by Subterranean Press, with this new combined edition being published in trade paperback by Tachyon Publications.  The book also includes a short Krasian dictionary, which is not really necessary as all the required terms are explained in the stories themselves, and some examples of wards and the types of demons they’re used to protect against, which is pretty interesting to read.

***** Brayan’s Gold - While an apprentice messenger, Arlen and his master are assigned a longer run than usual, transporting thundersticks to Brayan’s Gold, high in the mountains.  But while the compensation is generous, the risks are also high: bandits, harsh conditions, and several nights outdoors with only warded circles as protection against demons.  This is a fantastic story with a lot of different elements to it.  There’s a surprising amount of variety to the troubles Arlen faces as he heads into the mountains.

***** The Great Bazaar - Using a map procured from Abban, a khaffit from the great bazaar in Fort Krasia, Arlen hunts for treasure, and discovers demons he’s never faced before.  This story has scenes from both Arlen and Abban’s point of views.  It’s a pretty focused story, but you do get to see a little more of what life is like for the underclass in the bazaar.

Brett manages to pack a lot of content into both stories and writes them in such a way that they fill in gaps left by the novels but explain everything required to enjoy them if you haven’t read the books.

***** Arlen - This is a prologue that didn’t make the book, dealing with Arlen’s life before the events of The Warded Man.  It’s an interesting look at his youthful personality and how he was already pushing boundaries.

**** Brianne Beaten - This passage deals with a scene from Leesha’s life that kind of stands on its own, though it involves an unmentioned incident that ruined a friendship.  It helps to know what that incident is, but the scene still works if you don’t.

It’s a pretty short book, but the stories are high quality and help flesh out Arlen’s character.  If you missed the Subterranean Press editions, then this is a good time to get the stories.  If you’ve never read Brett, it’s a great sampler of his work and will whet your appetite for more.

Out July 14th.
Email ThisBlogThis!Share to TwitterShare to FacebookShare to Pinterest
Posted by Jessica Strider at 10:05