I'm not a huge poetry fan, so it was with some surprise that I found myself flipping through a copy of Life on Mars by Tracy K. Smith while shelving it a few weeks back.  The title intrigued me, and as I suspected, there was some SF content inside.  The book won the Pulitzer Prize for poetry in 2012. 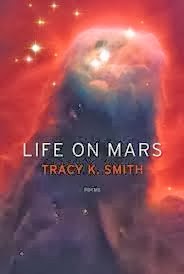 With allusions to David Bowie and interplanetary travel, Life on Mars imagines a soundtrack for the universe to accompany the discoveries, failures, and oddities of human existence. In these brilliant new poems, Tracy K. Smith envisions a sci-fi future sucked clean of any real dangers, contemplates the dark matter that keeps people both close and distant, and revisits the kitschy concepts like "love" and "illness" now relegated to the Museum of Obsolescence. These poems reveal the realities of life lived here, on the ground, where a daughter is imprisoned in the basement by her own father, where celebrities and pop stars walk among us, and where the poet herself loses her father, one of the engineers who worked on the Hubble Space Telescope. With this remarkable third collection, Smith establishes herself among the best poets of her generation.


Since poetry needs to be experienced, here are two stanzas from part one of "My God, It's Full of Stars".

Who is not, in fact, a man, sent to understand
The caravan of men now chasing him like red ants
Let loose down the pants of America.  Man on the run.


You can read some more of her work using Amazon's look inside feature.
Email ThisBlogThis!Share to TwitterShare to FacebookShare to Pinterest
Posted by Jessica Strider at 09:00