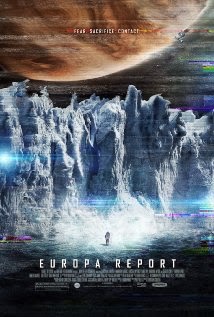 A privately funded international crew of 6 heads to Europa, one of Jupiter's moons, in the hopes of finding alien life.  Before they reach Jupiter a solar storm knocks out communications with Earth.  This is a documentary detailing the trip now that footage from the shuttle has been recovered.

The documentary is told predominantly via the views of two women: Dr. Unger (Embeth Davidtz) on Earth who helped plan the mission and Rosa Dasque (Anamaria Marinca) the ship's pilot.  The narrative jumps around in time, making it somewhat hard to follow if you're not paying close attention.  It quickly becomes clear that some accident has happened on the shuttle, but you don't find out what it was until half way through the film.  After that revelation the narrative becomes linear and much easier to understand as the crew reach Europa and begin their mission.

The movie has some great twists, which keep you on your toes as you try to figure out what's happened with the shuttle and if their mission was successful.

The special effects are great and the science is accurate.  The film is reminiscent of both 2001 and 2010 (which also features a crew looking for life on Europa, though this crew uses a different method to stop the ship once they reach the moon).

The varied actors all do an amazing job.  There's no hysterical woman scene (thank goodness), even though the film becomes something of a horror movie towards the end.

If you like science in your science fiction, this is a great film.

Hadn't heard of this one, but your review has me hooked. Will be checking it out, thanks!

I was (fortunate?) enough to be able to pre-screen this film and found it - bad.

As a point of illustration: the mission to Europa is to find life. That's the MISSION. Yet the mission is stymied when their ice drill breaks (boy has NASA gotten really bad at planning or what?) and a crew member is lost because they get volatile fuel on their spacesuit that can't be introduced to the ship's self-contained environment. Ummm wait. Wasn't it a search and return mission for alien LIFE? And yet, there's no isolation chamber on the ship? One that could be used in an emergency by an astronaut who has been contaminated?

Yes, absolutely, the visuals were great, especially the space and planet shots, but given the (obviously) very poor thinking that went into the logistics of this mission, it's no wonder that the crew often acted like idiots - that's about the only people who would agree to go on such a mission.

You've got some good points Steve. I have to admit, I tend to be more critical about the books I read than the movies I see. As long as the film entertains me, I'm good. :)