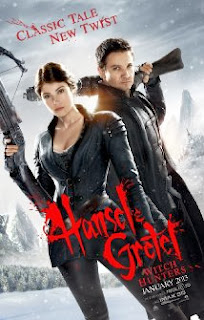 Cons: some special effects not as good as others, some gory scenes

Left in the woods as children by their parents for unknown reasons, Hansel (Jeremy Renner) and Gretel (Gemma Arterton) stumble on a witch’s hut.  They manage to kill the witch and escape but not without personal cost.  They decide to become witch hunters and, now adults, are hired to help find several missing children in a small village.

I expected this to be a campy, somewhat cheesy film.  It wasn’t.  The plot takes the witches seriously, with mostly good special effects.  There’s a reason these kids are being kidnapped and why the witches come after Gretel later in the film.  I appreciated that the mystery of their parents’ abandonment was also resolved, as was their invulnerability with regards to black magic (which is what allows them to be witch hunters).

Gretel’s character was my favourite.  She’s tough as nails, taking beatings and getting back up.  I loved the trust between her and her brother when fighting, that they’d cover each other’s backs and complement each other’s moves.  She’s also the one who figures out several of the mysteries the movie presents them.  And she wears appropriate clothes for her line of work.

One surprising addition to the story was Hansel's becoming diabetic due to all the candy the witch forced him to eat.  While his condition isn't named, he's forced to take injections every so often to stay alive.  This isn't something you normally see in fantasy films so I appreciated it.

There are some gory scenes, which I wasn’t a fan of, but which showed how evil the witches were.  Indeed, there’s a lot of mayhem and destruction in this film.

Ultimately, the move was much better than I expected and I enjoyed it.