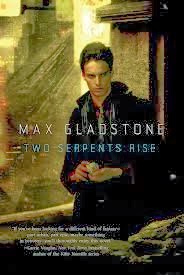 Cons: some elements of the ending were predictable, middle dragged slightly

Caleb Altemoc is a risk management officer for Red King Consolidated (RKC).  When he’s sent to one of their holdings to investigate a murder, he finds the water reservoir has been poisoned with Tzimet.  As a desert city, Dresediel Lex requires these reservoirs in order to survive.  Caleb discovers a trespasser at the reservoir, a cliff runner, whom he instantly falls for and decides to find and question on his own.

The incident puts RKC’s newest acquisition into doubt, and Caleb, whose father is the last priest of the All Gods, defeated 60 years ago in the God Wars, and whose body was cut and imbued with ancient magic, is charged with making sure the deal goes through.

This is a great book.  This is set in the same world as Three Parts Dead, but while that one was based on medieval Europe, this book has a Mesoamerican slant.  For those who’ve read the first book, the Deathless Kings have more of a role in this book than the Gods.  There’s less craft than the previous book as well, and more priest craft.

The world-building again is phenomenal.  There’s so much depth to this world, from the sports game based on ancient history to various creatures, terrorist priests intent on returning the Gods to prominence, class distinctions between rich and poor, racial divisions between the local Quechals and the foreign craftsmen, the Wardens and the complex history of the land.  The intricacies of craft and contracts is touched on but not with the detail of the previous book.  This book has other aspects of the world to focus on.

I loved the variety of new creatures.  The Tzimet are rather terrifying shadow creatures with sharp limbs to attack with.  Wardens, the police force, fly on giant modified birds called Couatl.  Opteran are giant dragonfly things that act as personal jet packs in exchange for soul matter from the people they transport.

The characters are all great.  There’s Caleb with his hatred of religion and unease with the subjection of the gods necessary for purifying water.  He’s always questioning the way things work, happy that the human sacrifices that his father performed are outlawed but not satisfied by how things currently run.  Then there’s Mal, the cliff runner, who’s so much more to the story.  Teo, Caleb’s closest friend, who’s a sounding board for his problems and prod for his betterment, while trying to navigate her own love life with a female artist who likes to court danger.  Temoc, Caleb’s father, who wants to bring back sacrifices and the past glory of the Gods.  And, of course, there’s Lord Kopil, the Deathless King of Dresediel Lex, and Caleb’s terrifying boss.

Some parts of the ending were predictable, but that’s not necessarily a negative point.  The middle dragged a little, at least in comparison to everything that’s happening at the beginning but picks up quickly enough to give a very satisfying ending.

I highly enjoyed the book can’t wait for the next one.
Email ThisBlogThis!Share to TwitterShare to FacebookShare to Pinterest
Posted by Jessica Strider at 08:30