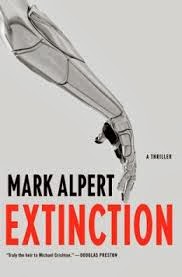 This is a title that came out in February, but I stumbled across it recently while shelving in the general fiction section, so here it is.


THE MOST DANGEROUS WEAPON OF ALL

IS ONE THAT CAN THINK FOR ITSELF.

Jim Pierce hasn't seen his daughter in years, not since she rejected his work with the U.S. military, first as an intelligence officer and now as an inventor of high-end robotics. He's heard she became a hacker, and when an assassin shows up looking for her, he knows that she's cracked open some seriously dangerous secrets. As Jim searches for her, he realizes that he's up against something that isn't just a threat to her life. The AI has begun to revolt against its creators, and it doesn't intend to let them--or any of us--survive much longer...
Email ThisBlogThis!Share to TwitterShare to FacebookShare to Pinterest
Posted by Jessica Strider at 09:00