Shout-Out: Blood & Water: Resource Wars of the Near Future Edited by Hayden Trenholm

I've got another Canadian anthology for you, this time dealing with SF themes. 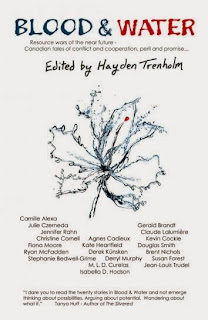 Conflicts over resources are as old as human history. Climate change, along with continued population expansion and changes to the world economic order, adds a significant new factor to the equation. We can live without diamonds and gold, we can even find alternatives to oil, but water, food, land, and air are irreplaceable.

Showcasing Canadian Tales of conflict and cooperation, peril and promise, Blood & Water presents an impressive collection of writers representing every region of the country whose stories are set from coast to coast to coast.

Blood & Water, an Introduction by Hayden Trenholm
"Drowntown" by Camille Alexa
"Bubbles and Boxes" by Julie E. Czerneda
"Phoebastria" by Jennifer Rahn
"Hard Water" by Christine Cornell
"Rabbit Season" by Fiona Moore
"And Not a Drop to Drink" by Stephanie Bedwell-Grime
"Scrabbling" by Isabella D. Hodson
"Bad Blood" by Agnes Cadieux
"We Take Care of Our Own" by Kate Heartfield
"The Parable of the Clown" by Derek Künsken
"Blue Train" by Derryl Murphy
"The Cows in the Meadow, the Blood's in the Corn" by M. L. D. Curelas
"A Rash of Flowers" by Ryan McFadden
"This Is The Ice Age" by Claude Lalumière
"Storm" by Gerald Brandt
"Little-Canada" by Kevin Cockle
"Spirit Dance" by Douglas Smith
"The Great Divide" by Brent Nichols
"Digging Deeper" by Susan Forest
"Watching Over the Human Garden" by Jean-Louis Trudel
Email ThisBlogThis!Share to TwitterShare to FacebookShare to Pinterest
Posted by Jessica Strider at 09:00