This is my 4th year doing an "If you like... try..." endcap at the store, which makes it my 4th such reading list here as well.  I'm not sure if I'll be doing one next year, since there won't be an endcap for it to go on.

Remember, this isn't meant to be a 'best of' list.  I tried to pick a mix of titles, some by smaller presses, some that didn't get much publicity/recognition when they came out.  A lot of titles I loved this year didn't make this list simply because they're on other displays at the store.  Oh, and I purposely make up categories for this display so as to catch what's hot at the moment.

I've typed up the books below in the order they appear on the display.

And this has been up for a month already, so if you come to the store to check it out, don't be surprised if there are a few changes (since there won't be much time for restocking I'll be modifying the display as things sell out). 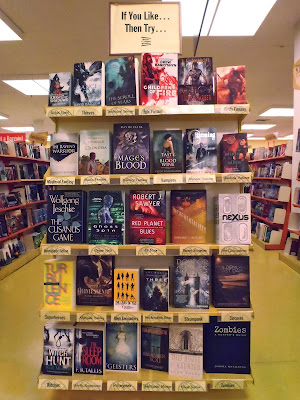