From the press release regarding the series:


Contra Alliance begins in 2035 amidst superpower conflict between the United States and China. The story follows a NATO Special Forces unit that uncovers a galactic conspiracy and secret invasion on Earth while engaging a militant group called The Revolution. Since the NATO mission is Counter-Revolutionary, the strike force is codenamed CONTRA. 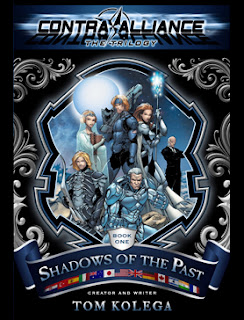 Book One: Shadows of the Past

Set in the near future where global strife threatens humanity, Shadows of the Past follows the raging conflict between good and evil on Earth. Book I explores the adventures of NATO's Counter-Revolutionary (CONTRA) strike force as it engages in battle against the mysterious rogue group, The Revolution.

In tracking the shadowy Revolution, CONTRA discovers signs of a supernatural or extraterrestrial presence behind spreading global chaos. Peril intensifies in a world already on the brink of war.

From southern Colombia and occupied Taiwan, to central Russia and the streets of Jerusalem, follow the lives, relationships, and experiences of the CONTRA officer corps as the truth they discover reveals shocking origins to The Revolution.

An unexpected journey ensues, exposing clues that unlock a concealed reality. Hidden secrets place Earth in the midst of an ancient war. As revelations deepen, the course of human history alters, setting an intriguing entry-point into The Contra Alliance Trilogy.

Again from the press release:

Shadows of the Past retails at $22.95 showcasing cover artwork by celebrated comic artist Joe Benitez (Lady Mechanika). The novel is 376-pages long, with an e-book version available on Kindle, iPad, and Nook for $3.95.