Book Review: Trouble And Her Friends by Melissa Scott 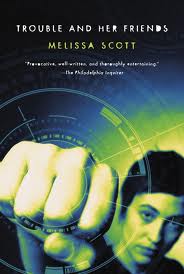 Cons: grammar tense shift from the real world (past tense) to the net and character's thoughts (present tense) was distracting

Pro/Con: very involved story (you have to pay close attention), slow paced, two lesbian love scenes (both are short and less involved than what you'll find in a traditional romance novel)

Trouble walked away from her life as a cracker and her girlfriend, when the Evans-Tindale law passed, making net crimes prosecutable in the real world with harsh penalties.

Three years later, a new cracker's using the name Trouble and forces the real Trouble out of retirement.

For a book dealing with the internet and computers, the technobabble's surprisingly easy to comprehend.  It's a book that requires attention, but I'm not the most well versed when it comes to computers and had no difficulty following the story.  Having said that, it's possible people more in the know will pick up on errors regarding cracking and net use that I didn't notice.

One thing I really like was how, though there were real world consequences for things that happened on the net (sore fingers from trying to crack IC(E) security systems due to the nerve pulse they give off) there was no 'you have to make it back to a home port before you can get off the net' (like in the Matrix or Tekwar).  Though other crackers considered it a lack of skill to use it, users could hit an emergency disconnect.

I also liked that there were societal divisions on the net between those who were light and shadow (ie, criminals and cops/regular users), on the dollie (connection slot that only allowed data transfer) and those on the wire (brainworm connection that translated data as sensations and illusions).

The protagonists are both apologetically *unapologetically lesbian. ** Given that the book was originally published in 1998 I thought it was great that the author felt no need to apologize for or justify their sexuality.   And while they're discriminated against in the novel, they manage to form communities, both on and off the nets.  And for those of you who are curious, there are two quick but complete love scenes.  If you've read a modern romance novel you've probably read more explicit stuff already.

The book was a fairly slow read, as the plot and technology were fairly involved.  My only complaint was with the verb tense changes between narration and thoughts and again between the real world and the net.  I found the switches distracting and caused me to lose my place in the story.

Well ahead of its time, Trouble And Her Friends is an interesting, relevant read.


* Corrected April 17th.  I noticed this error when doing my 'should book reviews mention content issues' post. Talk about changing the meaning of the sentence.  Sorry I didn't notice this when posting and for any confusion it caused.  ** I've added this sentence to clarify my meaning for including this paragraph.
Email ThisBlogThis!Share to TwitterShare to FacebookShare to Pinterest
Posted by Jessica Strider at 16:07