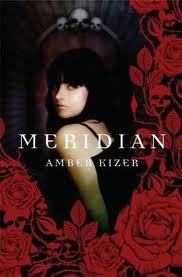 Pros: interesting premise, fast paced
Cons: unrealistic motivations, obvious plot twists
For Parents: nothing to worry about in this book

Meridian is used to things dying around her: insects and animals do it all the time.  She's always felt pain no doctors could treat.  When she witnesses a car crash on her 16th birthday, the pain she feels is intense - and she wasn't even injured.

Her parents send her off to her great aunt's to learn how to be a fenestra, a window for souls to pass through so they can go to heaven/nirvana.

It's an interesting premise and the light romance doesn't hurt.  I found the opening had too many pop references for my taste (since I generally don't get them) and some of the character's motivations are bizarre.  Meridian's mother wants her to have as long a childhood as possible so she doesn't explain anything to Meridian about who she is and why things keep dying around her.  This leaves Meridian completely unprepared when her life's put in jeopardy and has her believing that she's responsible for killing things.

Even Meridian's great aunt, who's annoyed at the girl's parents for the informational void, doesn't entirely explain what's going on, making Meridian dig for information vital to her survival.

And while I can understand that Tens, the aunt's helper/protector, is annoyed at having no choice in who he's destined to protect and thereby in his future, taking it out on the confused Meridian doesn't help matters.

I also found the church/Aternocti connection obvious and wondered 1) how the aunt missed it and 2) what 'good things' the church did that she alluded to at one point.  The church moved in and suddenly the two main employers in town shut down, it implemented a bread and juice confinement plan for pregnant women, after which the first seven women on it died.  I understand that people do strange things when afraid, but these are obvious correlations.  Why would you blame someone who has lived in the community for years and who has always helped people for a few bad events that happened soon after the church arrived?  One of which was a direct result of church action.  And how could the aunt have missed all of it?

But those are adult complaints.  Most teens will sympathise with Meridian's plight and enjoy the budding romance between her and Tens.
Email ThisBlogThis!Share to TwitterShare to FacebookShare to Pinterest
Posted by Jessica Strider at 11:41