Book Review: Outside In by Maria Snyder 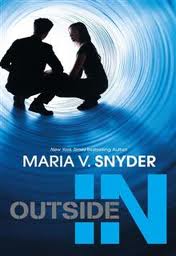 Cons: Trella manages to do an awful lot despite injuries and being tracked at one point

The Pop Cops are in the brig and a committee now runs Inside.  But the scrubs aren't happy and most have stopped working.  Trella's still reeling from the events of Inside Out and doesn't want more responsibility.  So she's only a consultant to the committee, which is ignoring all of her suggestions.  After a blast destroys a key system and injures a lot of people, Trella discovers that it was not an accident but caused by saboteurs.  How could things have gone so bad so fast?

Ms. Snyder's forte is with relationships, and this book shows off her skill in that regard.  Trella's relationship with Dr. Lamont begins strained and slowly develops into something new.  Her relationship with Riley also progresses at a natural pace, with her reckless behaviour causing him stress and hesitation with regards to taking things further.

As with the previous book, Trella makes mistakes and grows as a person when she acknowledges them.

Lots of unexpected twists will keep readers on their toes.  While Trella does endure more pain and injuries, again recovering remarkably fast, she remains a fun, flawed character.
Email ThisBlogThis!Share to TwitterShare to FacebookShare to Pinterest
Posted by Jessica Strider at 10:31