Book Review: Inside Out by Maria Snyder 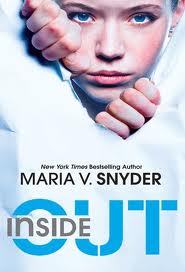 
For Parents: no content issues or language, mild violence

Trella knows their world is a cube.  Though she's a scrub, and relegated to a life of drudgery cleaning the ducts on levels 1 and 2, she's snuck to the upper levels often enough.

Now her skill at navigating the ducts and breaking the rules is going to get her into trouble.  Her only friend is convinced that Gateway - a door to an outside world - exists.  To prove him wrong she must retrieve something from the upper levels.  Only the authorities have set a trap and she's about to spring it.

While neither the idea of a two-tier society nor an enclosed environment are unique, their combination and lack of known history by the inhabitants makes this story interesting.

Trella's do it herself mentality could be grating, but it's not.  She's a teen who wants more from life and who's willing to change as her world expands.  She does heal much faster than I believe is possible, and functions well under high amounts of pain, but that's becoming common in teen dystopian fiction.

And she's given time to think about events and see the consequences of her actions, allowing for true character growth.
Email ThisBlogThis!Share to TwitterShare to FacebookShare to Pinterest
Posted by Jessica Strider at 09:00