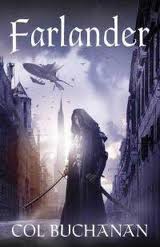 Ash, a Farlander Roshun (a group of assassins who perform vendettas on behalf of people protected by their seals), decides it's time to take on an apprentice when he almost dies on his most recent mission.  So when the starving 17 year old Nico breaks into his room and steals his purse, he decides he's found his man.

It's also a good time for Nico to leave Bar-Khos, a city that's been under siege by the Mannian army for the past 10 years.

Meanwhile, Kirkus, a young priest of Mann, the only son of the High Matriarch, is preparing for his initiation.  During the ceremony he culls a seal wearer and makes himself a target of the Roshun.

The book is technically well written, with a religious empire working towards conquering the rest of the world.  The characters are interesting and there are hints of steampunk (guns and flying ships).  Instead of fantasy races, the book uses different human races, based on geography and nationality.  Indeed, people interested in the racefail argument will find this book an example of how to do things right.  Not only are skin colours different, so are religions and cultural practices.  And there's a surprising lack of racism in the book.

Kirkus and the religion of Mann were the most interesting aspect of the book for me.  The religion, based on a lack of conscience and the purposeful dissolution of morals in order to become strong, was fascinating in its uniqueness.  And while the teen was obviously spoiled, it was interesting to see how he became what he was.

Yet, for all its good points I was never pulled into the story.  I didn't like Nico as a character, being surprisingly rude to his master (considering Ash was an assassin, someone who you'd think would deserve respect for that alone) and unwilling to accept responsibility for his choices.

Maybe Brent Weeks' The Way of Shadows has ruined me for apprentices in training, because I couldn't understand why Ash needed an apprentice at all.  He simply dumps the kid at his monastery/school and lets others teach him.  There's little to no actual instruction passing from Ash to Nico.  And it was unbelievable when Ash chose to bring the barely trained Nico on a mission.  The boy was a liability and not at the skill point where he should have been on missions, even as an observer.   And at no point did I feel that Ash had made an emotional connection to his apprentice.

Some of the Roshun's actions were also strange.  A fishing contest to resolve a dispute?  Having one person carry all the supplies on a mission, unbalancing him (so he's less able to fight and keep up) and making the others wait for him and try to get each of their materials from him during the fight seemed kind of stupid.

I found Mr. Buchanan's made up words for cultural things distracting.  For example, the popular drink was 'chee'.  It's never explained if this is made from leaves (like tea), or beans (like coffee), grains or even fruit.  So I couldn't picture it properly.  And for some reason, whenever I read the word 'chee' my brain spat out 'ghee', so I imagined these people drinking clarified butter, and shuddered.

Also, unlike traditional fantasy, there is no magic here.  There is a seer, but he waves off his prophetic dreams as the product of scholarship.  (I'm not sure what scholarship allows a man to look at half a paired seal and know if the wearer of the other half was murdered, but the author assured that it's not magic.)

Still, these are for the most part minor complaints.  And it's possible that had I read this book at a different time I'd have liked it a lot more.  So, give it a chance and see what you think of it.
Email ThisBlogThis!Share to TwitterShare to FacebookShare to Pinterest
Posted by Jessica Strider at 12:25