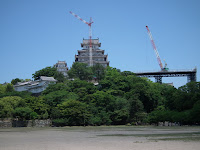 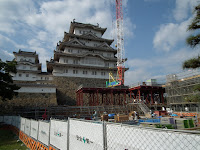 Wednesday June 9th, we decided to try Himeji and see how the castle looked, restoration and all. Discovering that the castle would be off limits during our trip was a major disappointment and I debated finding another castle to go to instead (and found one. But Himeji, the White Heron Castle, makes anything else settling for less).

One of my readers, Anrake, send me this link in a comment, which helped influence the decision to try Himeji after all. I'd tried to find up to date photos of the castle to see how far along the renovations had gotten and didn't have much luck.

We started with an outside tour of the castle grounds, including the moat. This meant we stumbled across the Hyogo Prefectural Museum of History. Not only is the mirrored view of Himeji Castle near the entrance beautiful, the museum has some great - and free - exhibits. Finishing our tour, we saw a heron in the outer moat! 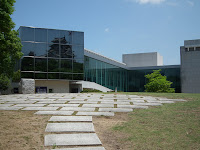 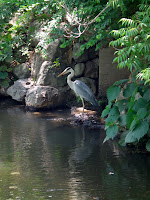 So, to anyone thinking of heading to Himeji in the near future, it's still an amazing site. Yes, construction is going on and one building is covered in scaffolding and several cranes are around the main keep, and yes, some views are impossible to get clear shots of, but with some creative photography you can still get great pictures. 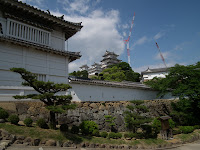 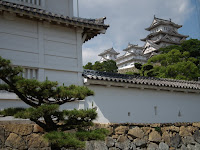 In addition to the heron we saw in the outer moat, we saw one fishing the inner moat. 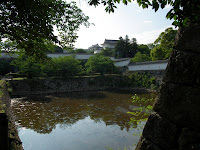 I was led to believe that the castle grounds were closed. They weren't. We were able to walk right up to the keep, entering the West Bailey and Long Corridor and seeing the Koshi-kruwa storehouse and all other features. 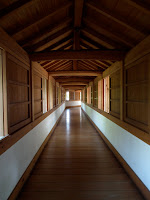 Yes, it's a shame you can't enter the main keep, but the rest of the castle makes up for that. And since the keep isn't covered with scaffolding yet, I highly recommend going. 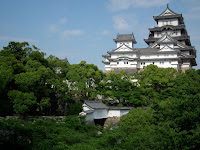 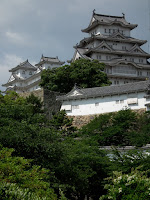 Email ThisBlogThis!Share to TwitterShare to FacebookShare to Pinterest
Posted by Jessica Strider at 12:09

Glad you had a good time at Himeji. The link up above actually updates pictures on the progress of construction every week. Also, If I had known earlier I could have hooked you up with a great English guide (free) who's a friend of mine. Keep it in mind for the next trip in 5 yrs when restoration is complete! Actually, anyone who's visiting should ask at the gate about English guides. There is a whole crew of them on standby. They're very good and knowledgeable and can coordinate a tour to match how much time you want to spend.

I'm not sure a guide would have wanted to accompany us. We took so many photos we were at the castle site for several hours. Most people would have been pulling hair waiting for us...

But it's good to know for the future, or for others heading out there.