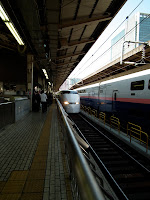 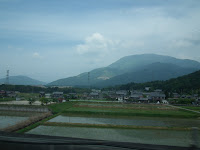 We left Tokyo the next day via Shinkansen for Kyoto. I managed to take some pretty decent photos from the window, despite the speed of the train. We stayed at the Capsule Ryokan Kyoto, about a 7 minute walk from the train station. The ryokan's basically a hostel, with some capsule rooms that have shared showers and toilets, and a few private ensuite rooms (where we stayed, and it's larger than the photos on their website suggest) with awesome showers, a larger TV than we had anywhere else and satellite reception!

We got settled and then headed out to see my favourite site in Kyoto - Kinkakuji, the Golden Pavilion. There's a viewing platform at the front, which though crowded, allows for some amazing views. The pond and gardens are also nice, though with the weather as hot as it was there wasn't much moss to speak of and what they did have was mostly brown. 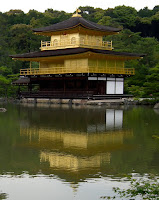 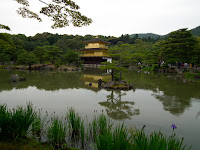 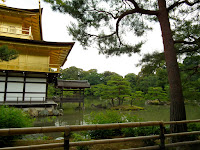 After the temple, we went to the Teramachi shopping area and had dinner, then headed for Pontocho, which I'd been told looks beautiful at night. Correct. It's an older district of Kyoto, where geisha still perform. The buildings are older and wooden fronted with lanterns lit at night. From the bridge of the river, you can see all the restaurant patios lit up (sorry, the picture's a bit blurry). 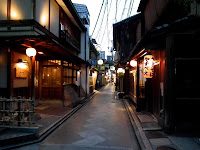 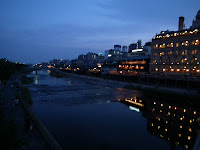 To end the day, since we were in the area at night, we headed over to see Gion Corner. It's a long running show of Japanese culture, put on mainly for tourists. The performance has sections on the tea ceremony, ikebana (flower arranging), koto music, kyomai (Kyoto style dance), gagaku (court music), kyogen (comic play) and my favourite, bunraku (puppet play).

Next is a short sample of the dance.

Finally, here's a short clip of the Bunraku. The doll shows a remarkable amount of emotion through 'body' language.

Anyway, the program they hand out for the show has enough explanation of the various arts that it's easy to follow along. And there's both Japanese and English explanations before each segment.
Email ThisBlogThis!Share to TwitterShare to FacebookShare to Pinterest
Posted by Jessica Strider at 10:00

katrina thot the court music was 'too loud'. i don't think she liked it.- karin

Yeah, our cat didn't like the music when I played the clip to edit it. I assume it's an acquired taste. I doubt many people nowadays acquire it though.

On the other hand, it's quite impressive that the actual art has been preserved for so long. A lot of western art forms have died, some rediscovered and others gone for good. The Japanese have been good at keeping their history intact and alive. You can still hear gagaku at certain shrine ceremonies.