We headed the next day for, what I thought, would only be an hour or two excursion: the Fushimi Inari Shrine. It turned into a full day of walking up and down steep steps surrounded by red torii gates.

First off, if you ever go there, get a map! I picked one up back where we started, several hours after it would have been useful, at one of the tourist shops for free. The map notes the shrine names in Japanese and shops along the way in English and Japanese. It also shows where the trails diverge and leave the shrine complex (which would have prevented us from taking an hour + detour).

We started on Omote Sando street and walked to the Fushimi Inari Taisha Shrine. 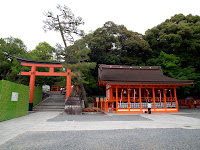 Then we headed along one side trail to the Senbon Torii (thousand torii). 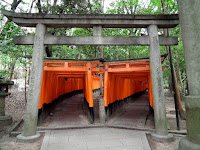 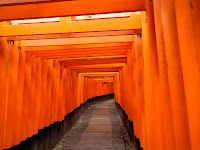 Walking between hundreds of tightly packed torii is pretty awesome. There's enough room for the sun to peek through every foot, but it's still a bit surreal. This segment is what I thought the shrine was, so I was very surprised to reached another large shrine and discover the torii continue. And boy do they continue.

We ended up climbing past numerous side shrines, a viewing platform (where the trail splits and it's VERY easy to take the wrong path - as we did and another couple was about to) and the hilltop Shin Pond. 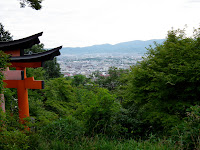 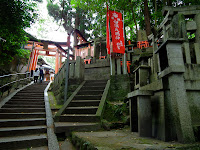 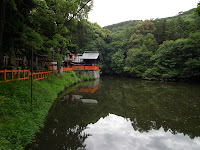 The front of the torii all have the same two symbols on the cross bars. The backs however, have the name of the donor and date on each. And if you're wondering how much it costs to have a wooden memorial, here's the pricing chart. (The rule of thumb I followed for yen when I lived in Japan is to remove the last two 0's and consider that the US price. It's not as accurate now, but will give you a general idea of how expensive these are.) 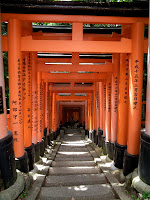 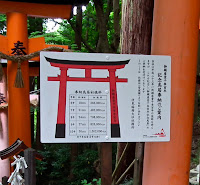