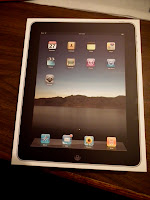 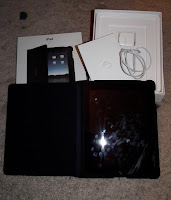 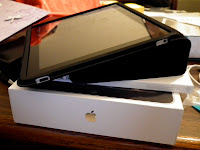 The same night I brought home the Kobo, my husband surprised me with an ipad! We'll be bringing both to Japan as e-readers. In the box were the ipad, a USB connection cable, a USB outlet adaptor (so you can charge it from a wall plug in addition to your computer). He also bought a slipcover for it. This acts both as a light shield in direct sunlight (so you can read it better) and a stand. It also helps protect the ipad from fingermarks (you can see how receptive it is to fingerprints in the middle photo) and other damage.
I spent some time adding Project Gutenberg books on it using both the ibook and kobo apps. When we get back from our trip I'll post the pros and cons of the ipad vs the kobo as ereaders.
On that note, I won't be responding to comments (or emails) for the two weeks we're gone. And while I won't be posting anything live, I have a number of posts set up. Tomorrow there's an interview with Stacia Kane, and look forward to a zombie themed reading list, a book review of Jim Hines' Red Hood's Revenge, and movie reviews for Ponyo and The Seven Samurai (to get you in the right mood for my posts about our trip once I return).
It's been 5 years since I last visited the land of the rising sun. Seven since I lived there. It's been too long. We're planning on spending a few days in Tokyo and Kyoto, with side trips to Osaka and Hikone (and perhaps Himeji). Then it's North for Sendai (Matsushima), Morioka (the city I taught English in for 2 years) and Tazawako (Nyuto Onsen) before heading back to Tokyo. Can't wait!
Email ThisBlogThis!Share to TwitterShare to FacebookShare to Pinterest
Posted by Jessica Strider at 09:00

Sounds great. You're really hitting a lot of the best spots! If you expected to visit Himeji Castle in HImeji, please be aware that they have begun a massive restoration on the main keep and a few other areas from early April. You will not able to enter the main keep at all until October. The following site (sorry Jse only) has pictures as of May 30 of what the main keep looks like form several different areas.

Here's to good weather and lots of fun on your trip.-karin

Thanks Anrake, I found your comment once I was in Japan, and the pictures of where the construction of Himeji castle was helped us decide to go there (I knew reconstruction had started, but didn't know how far the scaffolding had progressed). Turns out to have been a great decision. We got lots of photos where you couldn't tell there were cranes, etc. around at all. I'll be posting some photos next week. Stay tuned.