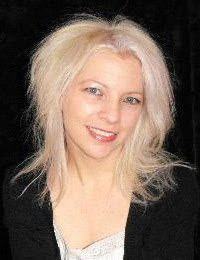 > What's the premise of UNHOLY GHOSTS?

In 1997 the dead rose from the grave as angry, murderous ghosts and slaughtered about 2/3 of the earth's population. Of course, no one knew how to solve the problem or take care of the ghosts until a small underground magic group, calling itself the Church of Real Truth, was able to banish the dead into a vast underground cavern, now (about 23 years later, at the time of the books) called the City of Eternity. Because of this the Church is now in charge; they're government and religion all in one.

Chess Putnam works for the Church as a Debunker. Essentially, because the Church pays a settlement to those who are bothered by ghosts, some people try to fake hauntings as a way to get money. Chess is a good witch but a troubled, flawed person; she was viciously abused as a child and is now a drug addict.

But she's a drug addict deeply in debt to her dealer, and when he offers her a chance to erase her debt by solving a haunting problem at an abandoned airport she takes the job. This leads to a lot more trouble; rival drug gangs get involved in the situation, Chess finds herself getting involved in the lives of other people, and the problem at the airport looks like it's a lot worse than just a haunting.

It's a very dark book, but I think it's also a hopeful one. I'm very proud of it and the reviews so far have been excellent, which is great.

> What's the difference in tone between your Megan Chase series (the Demon books) and your new Chess Putnum series (the Downside books)?

Oh, the Megan books are much, much lighter. There's a lot more humor in them, a lot more comic relief. The world is very different as well; while Chess's world is one in which magic and the paranormal are part of everyone's everyday lives, it's all secret and hidden in Megan's world.

The Megan books also straddle the line between urban fantasy and paranormal romance much more closely. There's a lot of romance and sex in those books. Whereas the Chess books aren't really focused on romance; there is a little sex, and there is a romance subplot, but it's a very small part of the book(s).

> What's Radio Downside and how does it tie in to your books?

Sadly, right now it's not much! I eventually plan to set up an online radio station featuring the music I mention in the Downside books (which is what I call the Chess Putnam books). But it's a bit out of my price range, still. I have loaded playlists for all three books onto iTunes, though (US; I've got a friend in Canada working on getting them into Canadian iTunes) and am working on getting the songs listed on my site as well. And certainly I hope very much to get the station going as soon as possible.

THE CAINE MUTINY by Herman Wouk, WIVES OF THE FISHERMEN by Angela Huth, and NEVERWHERE by Neil Gaiman. At least at the moment! THE CAINE MUTINY is my favorite, and has been since I was seventeen years old, but the others vary according to my mood.

Oh, it's something I always wanted to do. It wasn't really until my first daughter was a baby and I was home with her that I really gave it a try, though. I sort of piddled around for a couple of years, then moved to actively seeking publication.

Oh, gosh. I honestly don't think I can name one! I really do love them all. While I've never been one of those writers who thinks of my books as babies or anything like that, I do think of the characters as people I'm very close to; I know them so well, and am so fond of all of them.

I'd change places with just about all of them, really. Even if it was only for a couple of days. The best thing about writing is getting to vicariously be all these other people, and live in all these other worlds.

Oh, dear. The first novel I wrote was a medieval romance, and it was absolute dreck. Never published, no; never really even submitted anywhere. I have it somewhere in a box (the computer I wrote it on was long since scrapped) and keep meaning to find it and look at it again for a laugh. It was really terrible. And it took me about four months to write, I believe; it ended up at something like 113,000 words.

Any love scenes are hard for me to write. Not sex scenes; I enjoy writing those. But the emotional "I love you" moments? I have a hard time with those.

I don't have a degree, actually; I've never attended a day of college, and thanks to my astoundingly poor math skills I ended up getting a GED--a General Education Diploma, which basically means that I didn't graduate from high school the normal way but sort of tested out of it.

But my life has certainly helped me write. I was homeless for a while as a teenager. I've worked lousy jobs. I've struggled to make ends meet (still do, really). I learned a lot, and saw a lot, and I try to use that as much as I can.

I write in my living room at night. :-) I generally start working after everyone has gone to bed, and work for two hours or so. I find that after two hours of solid work I'm kind of done, if you know what I mean. I need to recharge.

The best thing is getting to explore and be different people in different worlds. The worst thing? I don't know, really. I love writing. But it can also be rather scary to expose yourself like that. 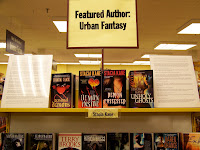 Read a lot. Write a lot. And visit the forums at AbsoluteWrite.com; I wouldn't be published if it weren't for everything I learned there.

I've heard writing the ending can help. But really, when I've had a hard time writing I've just had to force myself to keep going; I reward myself every 500 words or every 1000 words by taking a ten-minute break to play online or whatever, and that helps force me to get the words on the page.

See above. :-) I just remind myself that if I don't do it, it won't get done. And really, I love doing it, so once I get going it's not so difficult.

The first one, that awful medieval? One, because I only submitted it once. But I didn't count the others. Everybody gets a few rejections, that's just the way it goes. What matters is that someone says yes.