The Dark Tower movie opens tomorrow, based on a series of novels by Stephen King. I read the first two books in the series (The Gunslinger and The Drawing of the Three) about 15 years ago. I was living in Japan at the time and there was a small English language book library where I borrowed them. I wasn't that keen on the first one - too western for my tastes and the ending rubbed me the wrong way - but thought the second was well written, if rather bizarre. I'm really curious to see how they've adapted the first novel. Apparently after finishing the series King went back and revised The Gunslinger to be in line with the final ending.

To King, The Gunslinger demanded revision because once the series was complete it became obvious that "the beginning was out of sync with the ending." While the revision adds only 35 pages, Dark Tower purists will notice the changes to Allie's fate and Roland's interaction with Cort, Jake, and the Man in Black--all stellar scenes that will reignite the hunger for the rest of the series. Newcomers will appreciate the details and insight into Roland's life. The revised Roland of Gilead (nee Deschain) is embodied with more humanity--he loves, he pities, he regrets. What DT fans might miss is the same ambiguity and mystery of the original that gave the original its pulpy underground feel (back when King himself awaited word from Roland's world). --Daphne Durham (source)

If you haven't read the books, here's the Goodreads listing (the best 'back cover' I could find) for The Gunslinger: 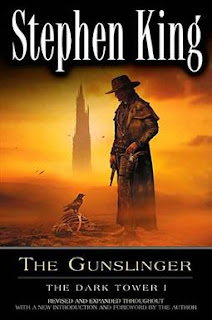 Beginning with a short story appearing in The Magazine of Fantasy and Science Fiction in 1978, the publication of Stephen King's epic work of fantasy -- what he considers to be a single long novel and his magnum opus -- has spanned a quarter of a century.

Set in a world of extraordinary circumstances, filled with stunning visual imagery and unforgettable characters, The Dark Tower series is King's most visionary feat of storytelling, a magical mix of science fiction, fantasy, and horror that may well be his crowning achievement.

Book I
In The Gunslinger (originally published in 1982), King introduces his most enigmatic hero, Roland Deschain of Gilead, the Last Gunslinger. He is a haunting, solitary figure at first, on a mysterious quest through a desolate world that eerily mirrors our own. Pursuing the man in black, an evil being who can bring the dead back to life, Roland is a good man who seems to leave nothing but death in his wake.

This new edition of The Gunslinger has been revised and expanded throughout by King, with new story material, in addition to a new introduction and foreword. It also includes four full-color illustrations in the hardcover and trade paperback formats.

The Books in the series in order are:
The Gunslinger
The Drawing of the Three
The Waste Lands
The Wind Through the Keyhole
Wolves of the Calla
Song of Susannah
The Dark Tower

Email ThisBlogThis!Share to TwitterShare to FacebookShare to Pinterest
Posted by Jessica Strider at 10:29