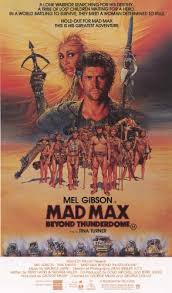 After being robbed of all his possessions in post-apocalyptic Australia, Max walks into Bartertown intending to get them back. But with nothing to barter but his skills, he agrees to take down Masterblaster in a death match in the Thunderdome.

First, let me say that while I know I saw this as a child, I didn’t remember anything about the film. I know it’s considered a terrible movie, so I wasn’t expecting much from it.

The world-building is surprisingly good. Using pig farmed methane as a fuel for electricity and gas is quite brilliant. I was also impressed that the kids had a slightly shifted language and had created a mythology for their past.

I was impressed by the number of women in the film, both in positions of power and as background dressing (guards, etc).

One of the failures of world-building was having Master, ‘the brain’, speak with a more degenerate form of speech than his underlings. It didn’t fit with the moniker of him being smarter than everyone else.

Max has lost the leg brace he wore in the last film, though he does wear a bandanna on one leg starting at the halfway point. Another oddity was that the actor who played the pilot was in the last film but he and Max don’t recognize each other, making me wonder if he was supposed to be a new character in this film (who just also happens to be a pilot).

The costumes were pretty… unique. I liked that different groups were dressed differently. Lots of mowhawk wigs and feathers for the guards. The townsfolk are all fairly shabbily dressed. The oasis kids wear skins. Antie Entity wore an outfit with the 80s giant shoulders and big hair.

There’s only one car chase, but it’s a pretty good one. Not as crazy as the one in The Road Warrior, but fun, nonetheless.

The story meanders a fair bit, with the plot at the beginning of the film disappearing entirely as the setting changes to the desert. They do eventually return to Bartertown, making the section with the kids, while interesting in some ways, feel rather out of place.

Tina Turner’s “We Don’t Need Another Hero” is a fantastic song, and I’d completely forgotten that it’s the theme of this film. While a few other songs fit the film, for the most part the soundtrack is overbearing.

The acting tends to be a little over the top, which makes it feel a bit more campy than it should. It was rated PG-13, and it shows. There’s a lot less violence than the other films.

On the whole, it was entertaining and better than I was expecting. But don’t go in expecting much.

Email ThisBlogThis!Share to TwitterShare to FacebookShare to Pinterest
Posted by Jessica Strider at 11:06