Book Review: Slaves of the Switchboard of Doom Written and Illustrated by Bradley Schenck 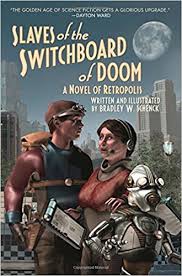 When Nola Gardner’s entire team of switchboard operators is laid off, she hires Kelvin ‘Dash’ Kent, a professional adventurer, to investigate who replaced them. Rusty, a unique robot person, is being followed when he uncovers a similarly unbranded, and therefore illegally made, robot. Abner Perkins has discovered some strange inefficiencies with the new Tube Transport system and decides to investigate.

I loved the characters in this. Dash is so much fun, and Nola’s got a good mix of spunk and intelligence. The Campbell kids are… something. They were both great and terrifying to follow.

The world-building was great. The switchboard is sort of an internet, if history had taken a different path. The priests of the spider god were fun, and kept the old school pulp feel. The robot League and the interactions between robot and human people show a positive future that’s often lacking in modern SF and something I enjoyed seeing.

The book manages to evoke a 1950s SF feel without relying on campiness. While the book isn’t laugh out loud funny, it did have me smiling and smirking quite often. There are some great comebacks. There are also some callbacks to authors and novels (like the Fraternal League of Robotic Persons being on Rue de Rur). While his role is quite small, I loved the writer Edward Bellin’s storyline.

Given the number of characters and storylines, it’s not surprising that the story drags a bit. There’s a lot to introduce and some of the mystery - being solved in fits and starts by several people - takes a while to turn up useful information.

The book is printed on very nice, high quality paper, likely due to the inclusion of several black and white illustrations by the author. These are great for giving a better feel of the actions, characters and locations. The author is highly skilled at drawing cityscapes and robots, though his human people sometimes look a little off.

Dr. Krajnik confused me. Her plan to help out seemed needlessly wasteful and surely someone so brilliant could come up with a more constructive way to perform a search. It also prevented her from seeing how things turn out. It also took me a while to figure out that she was on a different time schedule from others in the book.

I felt a little sorry for the robots, waiting for the plumber to return…

On the whole this was a fun book, quirky and different and worth the read.
Email ThisBlogThis!Share to TwitterShare to FacebookShare to Pinterest
Posted by Jessica Strider at 10:25