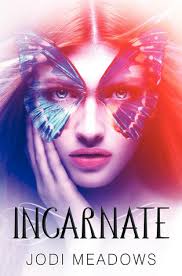 The people of Heart have been reincarnated hundreds of times, some believe by the will of Janan. When Li and Menehem’s child was not the reincarnation of Ciana, people feared what it meant for them. Eighteen years later, Ana wants to leave the cottage she was raised as a nosoul by her hateful mother and find answers regarding her birth in Heart. After a terrible night, she’s rescued by Sam, who becomes her friend with the possibility of more.

I really liked Ana. I liked how conflicted she was, uncertain of the world after the physical and mental abuse she suffered under her mother. I liked that she constantly questioned Sam’s motivations, constantly waiting for things to go bad. It showed real, persistent, trauma. I also liked that Sam’s previous deaths bring their own form of trauma for him to overcome later in the book.

The premise, of people who all know each other because they’ve been reborn together over and over again, was great. Throw in the possibility that they could die and not return, and their fear of Ana and what she represents is understandable.

The characters - Ana in particular - were often very passionate about life. Towards the end this got to be a bit much for me. It’s understandable in Ana, but the others are all old enough to be past the vagaries of first youth. While Sam’s age (and subsequent hormones) could account for some of his issues, he should have had an easier time coming to a decision about what sort of relationship he wanted with Ana.

The world was pretty interesting, but not developed very much. The author lists several creatures that live in the world, but you only actually see two of them. And the way they’re mentioned, always as a list, makes them feel more like window dressing than actual inhabitants of the world. Having said that, I greatly enjoyed what I learned but hope the later books explain more of the wider world.

This was a very quick read that kept me turning pages. And while the book ended up going in wildly different directions from what I’d expected, I really enjoyed it.
Email ThisBlogThis!Share to TwitterShare to FacebookShare to Pinterest
Posted by Jessica Strider at 10:55