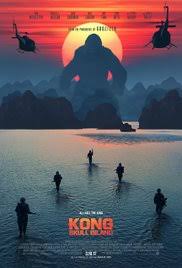 Cons: characters make too much noise in the jungle, minor irritants

A team of scientists, accompanied by a squad of Vietnam helicopter pilots, travel to Skull Island for a land survey. But what they find corroborates the crackpot theories of a small government organization: monsters exist.

First off, the cinematography is gorgeous. There are a large number of simply gorgeous shots in this film. The colours are vivid and the scenery lush.

There’s enough set-up for the characters for you to care for them when they reach the island, but not so much (given their number) that you mourn them when some die. I really liked a few of the characters and thought the acting all around was well done.

The creature effects were excellent, with Kong and the other monsters looking real for CGI creations.

The natives seemed to be treated more respectfully than these films generally do, which impressed me. The scene where they first appear is quite impressive and I loved the paintings in their sacred space.

A few minor things bugged me about the film. They make a surprising amount of noise walking through the jungle and on the boat, noise that could attract monster to them. There’s also a scene where the ground is combustable, where it felt like there should have been more explosions and/or fire given what’s going on.


There’s a scene at the end of the film where one of the characters makes the ultimate sacrifice. He takes out a grenade and waits for the monster to eat him, so he can heroically kill it through his own death. But the monster bashes him away and the man dies in a futile gesture. It made me think how war is generally portrayed - heroes, laying down their lives to save their families and countries. But the truth of the matter is that most combatants aren’t doing anything more than throwing their lives away. Yes, there are people and battles that were hugely important in gaining rights and freedoms (Vimy Ridge comes to mind), but I think modern audiences are no longer as enamoured by the fantasy of the war hero and glorifying sacrifices in war.
Email ThisBlogThis!Share to TwitterShare to FacebookShare to Pinterest
Posted by Jessica Strider at 13:26