This is the third book in the NewSoul trilogy, so this review contains spoilers for the previous books. 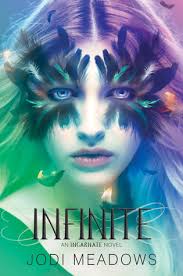 Cons: Ana angered, frustrated, and annoyed me; lots of major and minor irritants towards the end of the book

Severe earthquakes hit Heart and free Deborl and his followers. Ana and Sam call a group together and decide to escape the city and see if they can end Janan and the threat of Soul Night.

The book is quite exciting, with the characters finally meeting several more of the dangerous creatures living around Range. You also learn the answers to more of Ana’s questions about the temple books, sylph, and Janan.

I thought the complexity of the language in the temple books was great. I appreciated that each symbol could mean several things, creating a number of possible interpretations.

I didn’t like Ana as much in this book. She had a streak of selfishness (thinking of her own emotional needs and ignoring those of others) in the previous books, that stemmed from her emotional abuse at Li’s hands. As the books progressed she seemed to slowly learn how to open up and give emotional support as well as take it. But in this book she makes several decisions that cause deep pain in others later on simply because they help her avoid temporary pain in the moment. She ends up with an overinflated sense of her own importance and stops the reciprocal empathy that friendships and relationships require. I really wanted her to ask the others for advice, to help them through the guilt and sorrow they felt at things she reveals about their past. Basically, I wanted her to show them the love and support they’d given her, welcoming her into their lives, teaching her, guiding her. I mention more about this in the spoiler section below.

While the ending had a lot of twists and turns, by that point I was so frustrated by Ana and so many of the things that were happening that I didn’t really feel emotionally invested anymore.

Half way through the book, after following her for weeks through snow to find dragons for Ana’s insane plan, Ana leaves her friends behind with only a passive aggressive note telling them how they used to believe in her and now she’s going off on her own, for them to find when they wake up. There’s no acknowledgment of the sacrifices they’ve made or the fact that they FOLLOWED her all that way because they BELIEVED in her. Because it’s all about her at this point. Bare paragraphs later she comments on how the sylph give her the feeling of companionship the others didn’t anymore (because she wasn’t asking for or accepting advice, because she was hiding things from them, because she didn’t want to be burdened with their sorrow or guilt or help them work through it, etc). She strangely comes to the conclusion that she can succeed simply by believing in herself. She doesn’t NEED other people to believe in her, despite that feeling coming because she felt the COMPANIONSHIP of the sylph! Despite the fact that the sylph continue to help her by melting snow and ice so she can walk easier. She ignores the aid her friends gave her to get her to this point, including the large amount of help and protection the sylph provided. It’s only after she cheers herself up that she realizes that the sylph have also felt lonely, and determines she won’t ignore them again. But what about the friends she’s just left? What about their needs and the fact that they’ll wake up and feel even worse because after all their sacrifices for her it wasn’t enough? How much are they expected to give just to make her feel better about herself? When do they get something from this relationship?

When the group gets back together, once again it’s up to Sam to reconcile things. Which made me think that perhaps his friends are right and having a relationship with Ana’s not the right move. She’s obviously not ready for a romantic relationship. Maybe the best thing to do would be to give her a few years to find herself, grow up a little, see how other - healthy - relationships work and then try again if they both still want to. Going from an abusive mother to an overly loving and caring psudo-boyfriend may be too much of an extreme for her to dealt with.

The last half of the book contained so many irritating things. If the dragons could communicate with humans, why didn’t they? Did Sam use his song against them at some point creating that enmity or were they just unreasonably afraid of him? How big were everyone’s packs? (Apparently they had blankets in addition to their sleeping bags, books, enough clothes for Ana to wear 3 hats, etc when flying.) Why did they wait until Soul Night to attack? Couldn’t they have tried to kill Janan BEFORE the eruptions, etc? (There didn’t seem to be a reason to wait. That’s when Janan would be at his most powerful. And I would have thought stopping the eruptions would be just as important as killing Janan. If he’s dead, then Soul Night isn’t a problem. And if they fail, they have more time to figure something out before Soul Night.) How did Sarit forget why she and Stef left Sam and Ana alone when they hadn’t been gone that long? Why did Stef make the distraction explosions have separate detonation devices instead of tying that into their SEDs (like cellphone triggers)? Why didn’t Sam want his burns treated before they had sex? (It would have made him more comfortable.) How could they have sex at such a time, after such personal tragedies? (They’d have a lot of distracting thoughts, given what they had to do later that night and having just watched their friends die. I’d think it would be hard to get in the mood under such conditions.) Did everyone’s last reincarnation push other newsouls out of the way again? Why did Ana wait until she was in her teens to let Sam know she’d been reborn? (Ok, I know the answer to this one, selfishness. She wanted him to prove he could find her in her new body, like the Masquerade. Because she needed him to prove that he could pick her out of a crowd, or else how would she know he really loved her?). What ultimately happened to Janan? He gave them all one last reincarnation and then … leaves? He spent 1000 years in a prison to become a god and then lets his followers all abandon him?
Email ThisBlogThis!Share to TwitterShare to FacebookShare to Pinterest
Posted by Jessica Strider at 10:46