I've been doing these metal 3D puzzles for a while now and while they're difficult at times I really enjoy putting them together. They also look fabulous when done.

I bought this airship model off the internet and spent several hours yesterday building it.

First off, the set itself was great, shiny metal with etched details on one side. While the instructions were in Chinese, I've got English ones that I could compare them to to figure out the important notes (which side should be etched, folding the tab over or twisting it). So that was fine. 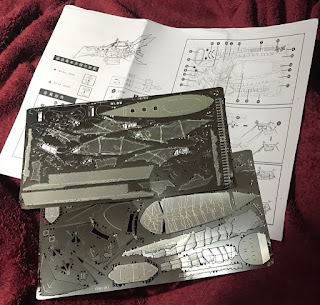 The first problem came in when I realized that just getting some of the pieces off the sheets was going to be difficult without breaking them. Well, I broke... quite a few pieces. I've had one or two breaks in the past, usually fixed with some crazy glue. Not this time. While some of the breaks aren't really noticeable the others... also aren't noticeable because you don't have a reference photo to compare it to when you're displaying it. Keeping that in mind kept me from becoming too frustrated while making this. In fact, I came up with the narrative that it had just been in a space battle to excuse the parts you could notice didn't look quite right.

Here are some shots of the build in progress. 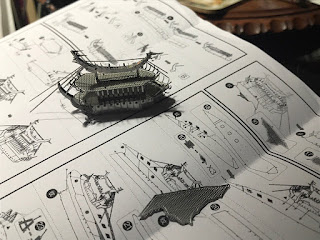 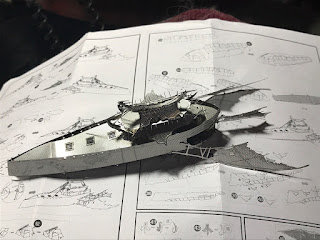 Towards the end things got... rather impossible. The front has 2 layers of overlapped metal. To get the front base piece in I'd have had to push down one of those layers to uncover the slot, while somehow slotting the base inside and around to get the tabs into place. There aren't many safe handholds, so this was a challenge. I gave up when the base broke in half. Well, actually I thought I could glue that break and while I was prepping it for glue it broke along another line. Who looks at the underside of a model anyway?

A few pieces broke or broke off and had to be repaired/glued into place. Two side pieces were so impossible to place that I just didn't bother. And attaching the top side layers meant damaging upper work as I tried to crimp the tabs into place.

Definitely a pain in the neck to build and by far the worst in terms of things breaking and fitting together properly. (You can see some of the broken/unused pieces in the photos below.) 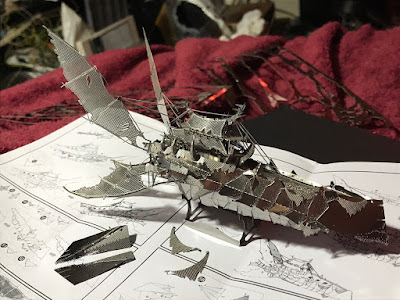 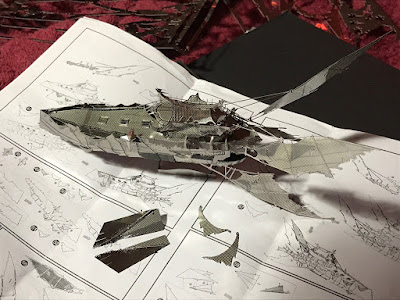 Doesn't it look gorgeous? Sometimes we aim for perfection and miss the beauty of what's actually there.
Email ThisBlogThis!Share to TwitterShare to FacebookShare to Pinterest
Posted by Jessica Strider at 13:01