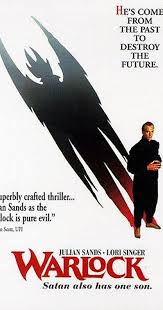 In 1691 a condemned warlock escapes justice in a demonic wind, ending up in the present day (’80s) and sent to find the grand grimoire, a satanic text that will unravel the world. The man who caught him in the past follows him to the future, and sets out to catch him again with the help of a young woman whom the warlock has cursed.

I have vague recollections of seeing this on TV in the early 90s. Certain aspects of the film do not date well. There’s a gay man who, we are told, is gay but not queer (after insinuations that he might have been a pedophile). I was impressed that he wasn’t the 80s stereotypical flamboyant figure. It actually took me a few minutes to realize he was gay. The ‘hero’ (maybe anti-hero?) slaps Kassandra as she tries to get away from him, she tries to hit him back but I can’t remember if she connects or not.

The warlock is well played by Julian Sands, who looks suitably evil. There’s little blood and gore but a fair bit of suggestive horrors going on (some just barely off screen). The film is quite atmospheric, using lighting and music to good effect, creating some good jump scares.

The special effects around the hand spells and the make-up for Kassandra’s curse are well done, though the flying scenes are on the cheesy side.

While a few scenes caused me to cringe, on the whole it was a decent movie, keeping in mind when it was made.
Email ThisBlogThis!Share to TwitterShare to FacebookShare to Pinterest
Posted by Jessica Strider at 11:09