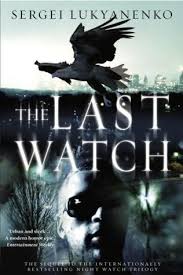 Three years after the events of The Twilight Watch Anton Gorodetsky is sent to Scotland to help investigate the murder of the human son of a potential Russian other, by what appears to have been a vampire. It’s quickly apparent that more’s going on than murder, and that whoever’s behind the murder isn’t afraid to use humans as canon fodder.

This book refers fairly often to the events in the previous books in the series, so if you haven’t read them if a while, a quick skim is in order.

As with the previous books this one is separated into three sections. It was cool seeing Anton work in different locales and dealing with new members of the watches. He’s an interesting character and the supporting cast grows a bit in this book while bringing back several characters from the previous books.

The mystery surrounding the hole in the twilight and Merlin’s spell kept me guessing even as other new spells were explained and used, and some new creatures - specifically different types of golems - show up. The book also had some Others using more technology with their magic, which was cool to see.

I enjoyed the book. This is my favourite urban fantasy series and I’m glad to be reading it again.
Email ThisBlogThis!Share to TwitterShare to FacebookShare to Pinterest
Posted by Jessica Strider at 10:58