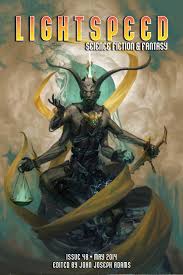 This is the first issue of Lightspeed magazine I’ve read and I was very impressed, both by its length and by the diversity of content. The quality of the stories was high, as expected, with several SF and fantasy. I read this over several months (I use magazines as commute material and don’t commute much anymore) so there was a disconnect between the stories and the spotlights (which go into the background of the stories).

Science Fiction
“A Tank Only Fears Four Things” by Seth Dickinson
**** Tereshkova has trouble overcoming her fear after the war. - A great story about how fears are pervasive but facing them with others can help.

“Selfie” by Sandra McDonald
**** Susan orders a selfie to stand in for her on a vacation with her dad. - An interesting story about memory and identity.

“Zero Temptation” by Sean Williams
**** A trip to the beach backfires when the d-mat that brought her there breaks down. - Interesting characters with a bit of romance.

Fantasy
“Willful Weapon” by Fred Van Lente
*** The prideful Cellach of Clan mac Roth is sent to America in disgrace. Robbed of his name and pampered position, he must pay off his debts by being an enforcer. - Though well written, I didn’t find the story that interesting.

“The Ba of Phalloon” by Matthew Hughes
*** Obron has defeated Phalloon and taken over his castle. Now his security guard Kaslo must secure it against refugees. - This is part of a serial, so it starts in media res and ends with more to come. There was a quick introductory paragraph summing up the basics, but the story proper had to explain a fair bit too. I felt kind of lost reading this, as the explanations seemed to be lacking some important information, but I expect the earlier stories explained more about the crisis and how things used to be. This segment of the story dealt with building a village and a trip to the underworld. It was interesting, but definitely felt like a chapter out of a larger story rather than a standalone story.

“Burning Beard: The Dreams and Visions of Joseph ben Jacob, Lord Viceroy of Egypt” by Rachel Pollack
****1/2 Joseph of the Coat of Many Colours reflects back on his history as a reader of dreams, and what the future holds for his people. - It’s an interesting look at what it means to see how your actions will effect the future. People unfamiliar with the Biblical story might find it hard to follow as it jumps to different scenes in Joseph’s life and his visions of Moses.

Novella
Shiva in Shadow by Nancy Kress
**** Two male scientists and their female captain examine an anomaly surrounding the supermassive black whole Sagittarius A*, both in physical form and as analogues on a probe sent towards its center. The two crews experience their discovery differently. - I was a little annoyed that one of the captain’s duties is to keep the two men sexually satisfied, though it did work for the story, allowing her to diffuse tensions and keep the mission on track. It was fascinating how the two crews diverged, and what minor changes created large tensions.

I skipped the three novel excerpts (Defenders by Will McIntosh, The Silk Map by Chris Willrich, and Babel-17 by Samuel Delany) because if I start reading a book I want the immediate option of finishing it.

The nonfiction section, interviews with Jeff Vandermeer and Michio Kaku, were quite good. I skipped a little bit of Vandermeer’s interview for fear of spoilers but both pieces left me wanting to read their works. The artist gallery and spotlight on Peter Mohrbacher was also interesting. I’ve not heard of him and seeing examples of his artwork was cool.

The author spotlights are quick Q and As with the story authors, going into why they wrote the stories they did, their inspirations and future projects. In future I’d want to read these immediately after the stories and find it odd that they’re not positioned next to them in the magazine.

The magazine ended with a short essay by Sofia Samatar called The Myth of Everyman, in response to why the cast of the film Noah was all white.
Email ThisBlogThis!Share to TwitterShare to FacebookShare to Pinterest
Posted by Jessica Strider at 10:46