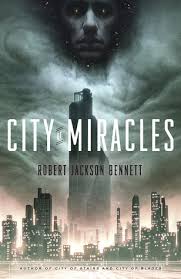 It’s been thirteen years since Sigrud last saw Shara Komayd, but the news of her assassination still hits him hard. When he goes looking for those who killed her, he stumbles into a series of plots started years past.  He also has to locate and protect her adopted daughter, Tatyana, from Shara’s enemies.

This is the third book in the Divine Cities trilogy. While it was possible to read book two of this series as a standalone, the personal connections and plot twists of book three require having read at least the first book, though I’d recommend reading both before starting this one. Knowing the close connection between Sigrud and Shara is what propels the first half of this book, with Mulaghesh making an appearance and Signe’s name showing up several times. But it’s Shara’s presence that infuses the story, and Sigrud’s regrets regarding his treatment of the women in his life that completes it.

I wasn’t sure how I’d feel about Sigrud as the main point of view character considering how straightforward he is. But he’s quite fascinating once you get into his mind. And while he isn’t the planner that Shara was, he’s quite intelligent and figures things out pretty fast.

It would have been nice to get to know Tatyana better, but I loved Ivanya. It’s strange seeing the future of a fantasy world, and seeing how people affected by the great events in one book pick up the pieces of their lives - or transform themselves completely - because of them. Ivanya is cool under pressure, having prepared for years for what’s coming.

The plot has several layers to it, some of them get pulled back quickly, while others take a while to be revealed.

This is a brilliant end to a brilliant series, and I’m not ashamed to say that it had me in tears several times.

Out May 2
Email ThisBlogThis!Share to TwitterShare to FacebookShare to Pinterest
Posted by Jessica Strider at 10:49