Many thanks to the amazing publishers who sent me books this month. :D

Avengers of the Moon by Allen Steele - I've not read any of Edmond Hamilton's Captain Future stories, but I have read some pulp SF, so this may be a lot of fun. 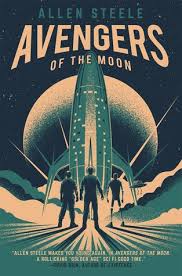 Curt Newton has spent most of his life hidden from the rest of humankind, being raised by a robot, an android, and the disembodied brain of a renowned scientist. This unlikely trio of guardians has kept his existence a closely guarded secret after the murder of Curt's parents.

Curt's innate curiosity and nose for trouble inadvertently lead him into a plot to destabilize the Solar Coalition and assassinate the president. There's only one way to uncover the evil mastermind-Curt must become Captain Future.

With the permission of the Edmond Hamilton estate, Allen Steele revives the exciting adventures of Captain Future.


Spill Zone by Scott Westerfeld, illustrated by Alex Puvilland - I've already read this graphic novel, and my review of it will be up on May 2nd, the day it's published. While the artwork isn't quite to my liking, the book is very atmospheric and sets up several intriguing mysteries. 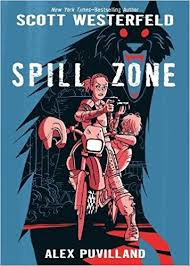 Three years ago an event destroyed the small city of Poughkeepsie, forever changing reality within its borders. Uncanny manifestations and lethal dangers now await anyone who enters the Spill Zone.

The Spill claimed Addison's parents and scarred her little sister, Lexa, who hasn't spoken since. Addison provides for her sister by photographing the Zone's twisted attractions on illicit midnight rides. Art collectors pay top dollar for these bizarre images, but getting close enough for the perfect shot can mean death-or worse.

When an eccentric collector makes a million-dollar offer, Addison breaks her own hard-learned rules of survival and ventures farther than she has ever dared. Within the Spill Zone, Hell awaits-and it seems to be calling Addison's name. The Space Between the Stars by Anne Corlett - This is a debut novel and sounds like a slow burn philosophical SF novel. I'm looking forward to it. Out June 13. 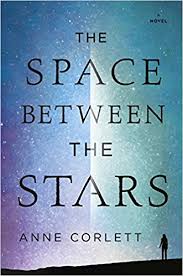 All Jamie Allenby ever wanted was space. Even though she wasn’t forced to emigrate from Earth, she willingly left the overpopulated, claustrophobic planet. And when a long relationship devolved into silence and suffocating sadness, she found work on a frontier world on the edges of civilization. Then the virus hit...

Now Jamie finds herself dreadfully alone, with all that’s left of the dead. Until a garbled message from Earth gives her hope that someone from her past might still be alive.

Soon Jamie finds other survivors, and their ragtag group will travel through the vast reaches of space, drawn to the promise of a new beginning on Earth. But their dream will pit them against those desperately clinging to the old ways. And Jamie’s own journey home will help her close the distance between who she has become and who she is meant to be... 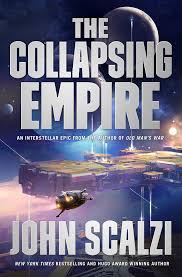 Our universe is ruled by physics. Faster than light travel is impossible-until the discovery of The Flow, an extradimensional field available at certain points in space-time, which can take us to other planets around other stars.

Riding The Flow, humanity spreads to innumerable other worlds. Earth is forgotten. A new empire arises, the Interdependency, based on the doctrine that no one human outpost can survive without the others. It's a hedge against interstellar war-and, for the empire's rulers, a system of control.

The Flow is eternal-but it's not static. Just as a river changes course, The Flow changes as well. In rare cases, entire worlds have been cut off from the rest of humanity. When it's discovered that the entire Flow is moving, possibly separating all human worlds from one another forever, three individuals-a scientist, a starship captain, and the emperox of the Interdependency-must race against time to discover what, if anything, can be salvaged from an interstellar empire on the brink of collapse.


The Legion of Flame by Anthony Ryan - I absolutely loved book one of this series, The Waking Fire, so I'm really looking forward to this. Out June 27. 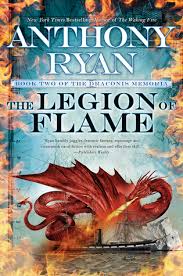 For centuries, the vast Ironship Trading Syndicate relied on drake blood—and the extraordinary powers it confers to those known as the Blood-blessed—to fuel and protect its empire. But now, a fearsome power has arisen—a drake so mighty that the world will tremble before it.

Rogue Blood-blessed Claydon Torcreek, Syndicate agent Lizanne Lethridge, and ironship captain Corrick Hilemore embark upon perilous quests to chase down clues that offer faint hopes of salvation. As the world burns around them, and the fires of revolution are ignited, these few are the last hope for the empire and for all of civilization.