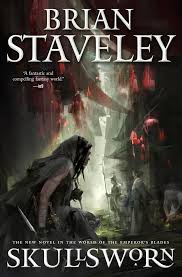 Pyrre has reached the final test for becoming a priestess of Ananshael. She must kill seven people in fourteen days. But her final target must be someone she loves above all others, and Pyrre has never known love. So she returns to the city of her birth and the man she once knew, hoping he’ll be The One.

Pyrre appears as a side character in Staveley’s Chronicle of the Unhewn Throne. This is a stand-alone novel where she - and her worship of the god of death - are in the forefront. While the previous books aren’t necessary to enjoy this one, there are descriptions of Rassambur, the assassin’s home base, in book three, Last Mortal Bond, which flesh out the city and the practice of Ananshael’s priests.

Witnessing her trial are two priests, Kossal, an older man who speaks truth and has few cares for the world, and Ela, the woman he loves, who loves everybody and who’s as graceful as she is deadly. Ela tries to teach Pyrre what love is, a conversation that involves as many knives as you’d expect from a duo of professional assassins.

There’s a surprising amount of banter considering the premise of the book. I enjoyed Pyrre’s attempts to understand her own emotions as she alternates between getting closer and further away from Ruc Lan Lac. Her plan is overly convoluted but has some fascinating consequences. I especially enjoyed the chapters dealing with the delta and life there.

The world-building was top notch, expanding an unexplored area of the world but tying it and its history into that of the previous books. The delta felt vibrant and the dangers - and how to deal with them - realistic. The local religion also had weight to it, practiced differently by the city folk and the delta people.

As expected, there are some fabulous fight scenes, against a surprising variety of people and things.

This was an excellent book.

Out April 25th.
Email ThisBlogThis!Share to TwitterShare to FacebookShare to Pinterest
Posted by Jessica Strider at 10:25