As part of my diorama plans, I've been learning how to make miniature books. I posted a video on how to make them a while back, and I've now made a few myself.

The first two I made are larger and include the only open book I've done so far. For the open book I wrote stuff on a few pages (writing less on pages that won't fully show, getting only the edges for the last few pages) and used thread to bind the pages together, then glued them to a piece of fake leather. The closed book is groupings of folded pages, glued together, then I laid a small piece of coffee filter to the spine to add strength before gluing the fake leather backing on. I used a gold pen for the markings on the cover. 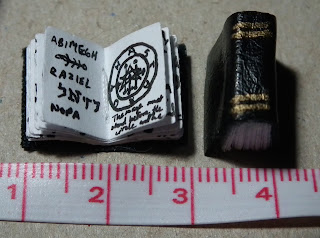 The next batch of three mini books (at a slightly smaller scale), are all closed. As with the closed book above, I aligned the edges of the folded pages and glued them together to form the spine, reinforced it with the filter paper, then glued on thin cardboard for the binding. The first two were coloured brown with a marker, the third with brass coloured nail polish (so it's shiny). The marker soaked through the cardboard making it fairly brittle, so I scuffed up one to make it look older. 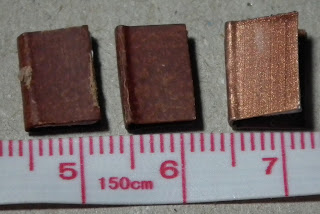 The final batch I did on an even smaller scale. I had to use clamps to hold the pages together. Getting them into the clamp and lined up wasn't easy (especially as I hadn't trimmed my nails in a while). I didn't use the filter paper on these as they're too small. 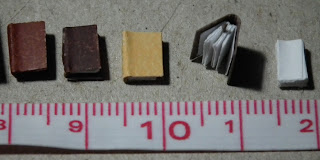 Here are all the books lined up, one of the clamps, and some of the prepared backing papers. I'll have to make a few open spell books at the smallest scale for my egg dioramas. 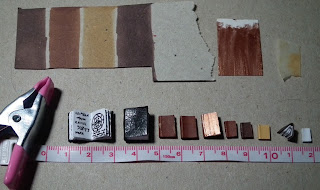 Email ThisBlogThis!Share to TwitterShare to FacebookShare to Pinterest
Posted by Jessica Strider at 13:42

These are so cool, Jessica! I'm really impressed by them!