My thanks, as always, to the authors and publishers who send me books. I don't have time to read them all, but I try my best.

Children of Eden by Joey Graceffa - I've finished this book, which was a quick, entertaining read, and will be posting my review of it on Tuesday. 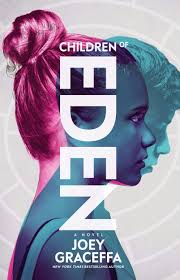 Rowan is a second child in a world where population control measures make her an outlaw, marked for death. She can never go to school, make friends, or get the eye implants that will mark her as a true member of Eden. Indeed, her kaleidoscopic eyes may very well give her away to the ruthless Center government.

Outside of Eden, Earth is poisoned and dead. All animals and most plants have been destroyed by a man-made catastrophe. Long ago, the brilliant scientist Aaron Al-Baz saved a pocket of civilization by designing the EcoPanopticon, a massive computer program that hijacked all global technology and put it to use preserving the last vestiges of mankind. Humans will wait for thousands of years in Eden until the EcoPan heals the world.

As an illegal second child, Rowan has been hidden away in her family’s compound for sixteen years. Now, desperate to see the world, she recklessly escapes for what she swears will be only one night of adventure. Though she finds an exotic world, and even a friend, the night leads to tragedy. Soon Rowan becomes a renegade on the run.


Cumulus by Eliot Peper - The publicity information compared it to Ada Palmer's Too Like the Lightning, so I'm curious to see if I'll like it. 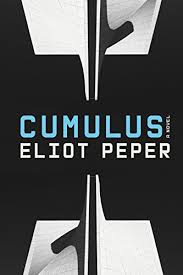 In the not-so-distant future, economic inequality and persistent surveillance push Oakland to the brink of civil war.

Lilly Miyamoto is a passionate analog photographer striving to pursue an ever more distant dream. Huian Li is preeminent among the Silicon Valley elite as the founder and CEO of the pervasive tech giant Cumulus. Graham Chandler is a frustrated intelligence agent forging a new path through the halls of techno-utopian royalty. But when Huian rescues Lilly from a run-in with private security forces, it sets off a chain of events that will change their lives and the world.

The adventure accelerates into a mad dash of political intrigue, relentless ambition, and questionable salvation. Will they survive to find themselves and mend a broken system?


Spellbreaker by Blake Charlton - This is the third book in the Spellwright trilogy, though apparently it can also be read as a standalone novel. 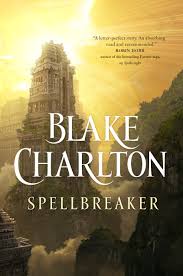 Leandra Weal has a bad habit of getting herself in dangerous situations.

While hunting neodemons in her role as Warden of Ixos, Leandra obtains a prophetic spell that provides a glimpse one day into her future. She discovers that she is doomed to murder someone she loves, soon, but not who. That's a pretty big problem for a woman who has a shark god for a lover, a hostile empress for an aunt, a rogue misspelling wizard for a father, and a mother who--especially when arguing with her daughter--can be a real dragon.

Leandra's quest to unravel the mystery of the murder-she-will-commit becomes more urgent when her chronic disease flares up and the Ixonian Archipelago is plagued by natural disasters, demon worshiping cults, and fierce political infighting. Everywhere she turns, Leandra finds herself amid intrigue and conflict. It seems her bad habit for getting into dangerous situations is turning into a full blown addiction.

As chaos spreads across Ixos, Leandra and her troubled family must race to uncover the shocking truth about a prophesied demonic invasion, human language, and their own identities--if they don't kill each other first.

Spellbreaker is the long awaited sequel to Blake Charlton's Spellbound, which was listed by Kirkus Reviews among the Best Science Fiction and Fantasy of 2011. This final installment of the Spellwright Trilogy stands alone as a complete story; however, fans of the series will find in it answers to the questions raised by the previous books about Leandra's parents, Nicodemus Weal and Francesca DeVega.

Email ThisBlogThis!Share to TwitterShare to FacebookShare to Pinterest
Posted by Jessica Strider at 12:58