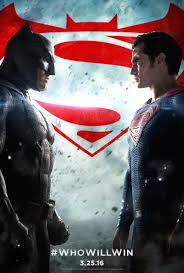 Cons: story is a mess, central character motivations don’t make sense and change for no reason, Lex’s character is very erratic rather than calculating,

Bruce Wayne and Lex Luther both want to bring Superman down because of the human cost of the Metropolis battle.

I was surprised by how well Ben Affleck played Bruce Wayne.  I thought he did a great job with the material he was given.  He’s in some ways a much darker Batman, willing to kill and maim to achieve his goals.  I also liked that he recognized he wasn’t necessarily one of the good guys.

I really liked some of the questions posed about Superman and whether he should use his powers to help others.  I thought the representation of people forcing him into a God/hero role was realistic, and showed a fundamental flaw in humans - that we all want someone to save us, but don’t allow for the humanity of that figure (ie, we want someone perfect who can save everyone and remove all danger, but can’t allow that someone with powers could be fallible in some way without then turning on and destroying them).  I liked that Clark was still conflicted about his powers and whether using them was the right course of action.  Having said that, it did frustrate me that others in the film couldn’t see how much worse Superman’s lack of involvement would have made things.  The Kryptonians from the Man of Steel (referenced at the start of this film) wouldn’t have just left everyone alone in the first film had Superman not appeared to stop them.

It also drove me nuts how long it took Lois Lane to realize she was a crutch for Superman.  And even when she figured it out, she still needs to be rescued several times because people have learned that Superman shows up when she’s in danger.

The special effects were really well done, though I didn’t like the overuse of slow motion and there were moments when I wasn’t sure if something was a dream sequence or really happening.  And Snyder’s several flashbacks to Bruce’s parents’ murder showed a lack of respect for the memory and intelligence of his viewers.

The movie tried to do so many things that it didn’t really accomplish any of them.  I would have liked more Lois and Clarke discussion about who and what Superman is to ground the character better.  The story as it stands was a mess, with characters changing motivations for no reason and so many stupid things happening.

I think the scenes with Wonder Woman were brilliant.  Watching this made me excited about her upcoming film.

This film was a time waster, and while it was entertaining enough, it had some many plot problems it’s hard not to nitpick them film when you’re done.


I’ve seen several articles/videos going over the problems with this film (one I’m embedding here), so I’ll leave out the more obvious problems (Why does Superman let the bomb go off when he should be fast enough to stop it?  How does he always know when Lois is in danger but not his mother?  Why does saying Martha’s name change Batman’s idea about Superman when only a moment before Batman was mocking Superman saying that his parents probably told him he was special?  Why does Lex create an obvious monster when his stated motivation in the film is to remove the threat of Superman, whom he things is a monster?  How does Lex know how to use the alien ship?  Why does the alien ship use fingerprint technology? Why does the ship speak English when it thinks it’s speaking to General Zod?) and go with some I haven’t heard mentioned.

Diana enters the film trying to retrieve a picture.  At the end she leaves, as if she accomplished this goal when what actually happened is that she got a digital copy of the picture back.  Unless I missed something, Bruce only copied Lex’s files, he didn’t delete them.  In other words, Lex still has him copy of the photo, only now Bruce has one too.  So by going after the photo, she made things worse for herself.  And realistically, the way things work in the DCU, she could have said the picture showed her mother or grandmother and people wouldn’t have thought twice about the resemblance.

Now, I’m not that well versed in the DC Universe, but I always pictured Lex Luthor as a cold, calculating, brilliant businessman.  While I agree it isn’t fair to dock the film points for not following my personal interpretation of the character, I do think it’s fair to ask how he’s done so well as a business man when he’s such an erratic and unbalanced person.  Who would be willing to deal with him?  Unless the empire was entirely built by his father and people deal with him because he already has the money and they’re hoping he doesn’t ruin things with his behavour.


It’s a good thing Bruce’s parents hired someone so well versed in espionage and building military grade weaponry and machinery as their butler or Bruce would have had some problems becoming Batman.


I really liked this video by Nerdwriter 1 on the difference between moments vs scenes, and agree that the over use of moments, rather than scenes, was a problem in this film.
Email ThisBlogThis!Share to TwitterShare to FacebookShare to Pinterest
Posted by Jessica Strider at 08:38