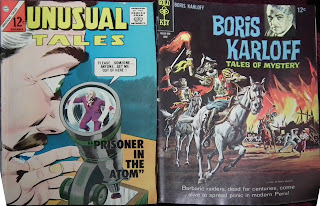 This comic consists of a series of short stories, one of which was not illustrated.

The titular story, “Prisoner in the Atom” involves a hen pecked scientist who has a theory about atoms, and the life contained within them.  It’s quite stereotypical now (scientist who doesn’t deal well with the outside world, nagging shopaholic wife), but the ending had a good twist.

“Man From Mars” is a great story about xenophobia.  Gossip abounds in an average small town when a strange new family moves in.  The twist ending’s now been done so often it wasn’t a surprise.

“Martian Mistake” is the prose story, about how Martians conquer Earth - and how one man fought back.

“Macklin’s Miracle” is an underwater ‘did it really happen’ story.  As with “Man From Mars”, modern readers will find the ending predictable, if abrupt.  It’s also got the trope of one man finds true love and his friend - who’s yet to find a good woman - believes she will come between them.

There’s a 2 page scientific comic called “Radiation and Space Travel”, talking about some of the problems we’ll have to overcome if space travel is to become a reality.

Finally, the comic ends with “The Land of Peace”, about three scientists from different nations (USA, Russia, and China) who have all discovered something more powerful than the A-bomb and are about to tell their respective government leaders about it.

Several of the stories are worth reading and were quite entertaining. But remember that what seem like tired tropes now were once new and surprising ideas.

[I'm not sure what the legality of this is, but when I was putting my review together I found this comic free to read online here (you need an account to download it). Considering the age of the comic, I'm assuming it's free of copyright, but if it isn't, tell me and I'll remove the link.]

This comic is also a series of short stories - a mix of ghost stories mostly designed to make you ask, ‘are they true?’.

The first story, depicted on the cover, is “Guardian of the Mounds”, set in Peru (though without any accurate Peruvian costumes or traditions - at one point Hades is referenced).  A treasure hunting captain and an archaeologist arrive in the village of Secara, hoping to find gold in the mounds near the village.  An old man warns them away from the sacred site.  The story revolves around mountain barbarians.  I would have called foul on their colonial Spanish dress if a later panel hadn’t called them Spanish barbarians.

This is the longest story and it’s accompanied with a non-fiction article about the money lights of Peru that supposedly point to buried treasure.

There are a few 1 page stories, “Secret of the White Harpoon”, about a whaler who falls off the boat and almost dies, and “Ghost Dog”, about a thief who’s chased by something he can hear but not see.

Two other longer stories finish the comic, “The Unwanted” about a man who dresses up in a bear skin and unintentionally scares people wherever he goes, and “Phantom of the Films” about a B-list actor who would like to do major horror films.


None of the stories are terribly good, but they are entertaining enough.  I found the front and back cover flaps interesting as they have “Keys of Knowledge”, one on steel production, the other on the British people. I wonder if these were added to give the comics a more educational feel.
Email ThisBlogThis!Share to TwitterShare to FacebookShare to Pinterest
Posted by Jessica Strider at 08:23