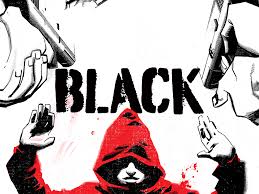 This is a comic I backed on kickstarter.  They’ve released the first of 6 chapters.

The premise for the project is: What if only black people had superpowers?

As expected, this issue is all set-up.  It starts with the debriefing of a cop who witnessed 3 black kids being shot multiple times.  One of those kids, Kareem Jenkins, survives.  There’s a brief introduction to what’s happening to him as he meets other superpowered people, meanwhile it’s clear they are being hunted by some government organization.

From the painted style of the concept art I wasn’t sure if I’d like the artwork of the finished comic, but I’m really liking what they’ve done so far.  It’s all greytone, which fits the subject matter well.

In terms of character design, I love Kareem’s long dreadlocks and his facial expressions are great - especially the panel where he wakes up after the attack.  There’s a huge amount of motion in that still frame.  The brief glimpse of the superheroes we’ve gotten showed a ripped man and a woman who’s not only wearing a more sensible outfit than superheroes generally do, but is also not as buxom as is typically the case.  Both of which I like.

I’m impressed with this issue and glad I backed the project.  I’m looking forward to seeing what comes next.
Email ThisBlogThis!Share to TwitterShare to FacebookShare to Pinterest
Posted by Jessica Strider at 08:32