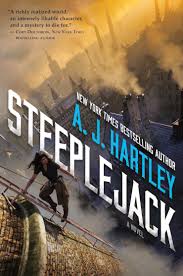 Anglet Sutonga is a steeplejack. When she was younger she cleaned chimneys. At 17 she’s too big for that, so now she works the factory stacks. After a series of events, including the theft of a city landmark, she’s hired to investigate a series of crimes that the police are ignoring. Meanwhile race relations in the city of Bar-Selehm are breaking down between the white upper class, the black Mahweni (those assimilated to city life as well as the tribesmen living traditional lifestyles outside of it) and the brown Lani, brought to the city by the whites as indentured servants and still not much better off, making her job urgent. And as tensions rise in the city, war between their northwest neighbours, the Grappoli, seems increasingly likely.

Bar-Selehm is a unique setting based on 19th Century South Africa but with fantasy overtones. The book is very contained to the city and its immediate surroundings, only mentioning Grappoli but not the wider politics of the outside world. Which keeps the book focused on the city and its problems. I loved that Anglet was able to mix with people of different races in different ways - depending on their social status, and how status and race were shown to be holdovers from the past, despite the current ideology that everyone is equal. There’s a great quote later in the book which sums up a lot of modern racism - and blindness towards it:

“We say we are all equal in Bar-Selehm, but you know as well as I do that that is not even close to being true. You cannot simply take people’s land, property, freedom from them and then, a couple of hundred years later, when you have built up your industries and your schools and your armies, pronounce them equals. And even when you pretend it is true, you do not change the hearts of men, and a great deal of small horrors have to be ignored, hidden, if the myth of equality is to be sustained.”

When going to the Drowning, where most of the Lani live, Anglet encounters hippos, monkeys, an ibex, and other creatures. She also mentions a few things that are made up, like weancats, which make the world feel both real and other at the same time. Similarly, the mineral that Bar-Selehm was built up on, luxorite, is made up, but the trade concerns, her brother-in-law’s stubborn effort to pan more, and how society interacts with the mineral is explored in some depth.

The author brings in just enough minor details of taste, smell, sight, and touch to make the world feel 100% genuine without bogging down the narrative at all.

I loved Anglet as a character. She’s necessarily tough and has to make a series of difficult decisions that change her life. I loved that her choices had consequences, and that as the book went on she often questioned the decisions she’d made. In several situations there was no good outcome, just the best she could do for now.

I liked that she encountered a wide variety of people during her investigation. The paper girl was probably my favourite, but Anglet meets people from several levels of society and cleverly finds ways to interact with them.

The murder mystery was tightly twisted so that while I figured out two of the twists at the end, several others were complete revelations. Looking back on the book as a whole the clues were there, but you take such a roundabout way to the end that it’s hard figuring out everything that’s going on. I found the ending quite a shock and really felt for Anglet.

It’s the first in a trilogy, but can easily be read as a standalone as the mystery is entirely wrapped up at the end. This a great novel with all the things people in SFF circles have been asking for. I can’t believe it’s not being more widely read and talked about.
Email ThisBlogThis!Share to TwitterShare to FacebookShare to Pinterest
Posted by Jessica Strider at 11:24